In the explosion of the freighter La Coubre loaded with war material on March 4, 1960 in the port of Havana , between 75 and 100 people died, with over 200 injured. The incident, which was never resolved, led to violent allegations by the Cuban revolutionary leader Fidel Castro against the US government under President Dwight D. Eisenhower . This escalation is considered to be the trigger for the US strategy, coordinated by the CIA , to overthrow the Cuban government by force.

On Friday, March 4, 1960, the motor ship unloaded a load of 76 tons of weapons , ammunition and explosives that had been bought by the Cuban government in Belgium and shipped via Antwerp at a pier in the port of Havana . After the USA had already imposed an arms embargo on Cuba in March 1958 during the rule of Fulgencio Batista , which remained in force after the change of power in 1959, the La Coubre was the fifth freighter with a load of weapons to call at the island.

At 3:10 p.m. there was a first serious explosion, whereupon numerous rescue workers and high representatives of the Cuban government such as Minister Ernesto Guevara and Prime Minister Fidel Castro rushed to the scene of the accident. Around 4 p.m. there was a second serious explosion, which also affected rescue workers. La Coubre was broken in two during the explosions ; the wreckage was lying on the quay wall with a large list. The explosions were so violent that parts of the propeller and anchor were found within one and a half kilometers in the city center.

There are different statements about the number of victims. It is certain that six French seamen of La Coubre were killed and three others were injured. In the following days, the number of 75 to 100 deaths was reported in the international press. 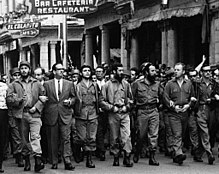 Castro immediately declared a day of national mourning . The burial of 27 of the victims on March 5, 1960 was preceded by a silent march led by the revolutionary government, which ran through the entire city center of Havana and ended at the Cementerio Cristóbal Colón main cemetery . From a platform erected there, Castro gave a speech broadcast live by all radio and television stations in the country, in which he sharply attacked the United States and accused the sabotage that had led to the disaster.

The Cuban cabinet provided one million Cuban pesos for the families of the victims ( 4.2 million  DM according to the contemporary West German exchange rate ) and 10,000 pesos (42,000 DM) for the relatives of the French crew members.

The cause of the explosion: accident or assassination?

According to the British historian Hugh Thomas , the cause of the accident could never be clarified:

Cuban showmen and dock workers thought it was an accident. Had inexperienced soldiers helped unload? Had dock workers smoked? Was it human error? Castro explained that the dockworkers had been searched for matches. Of course, the United States, and to a greater extent the Cuban émigrés in Miami, had a motive for preventing arms from entering Cuba, but there was no evidence. The Belgian expert Dessard spoke of sabotage , but it remains unclear how it could have been committed.

The explosion sparked serious diplomatic controversy between the US and Cuba:

Cuban Prime Minister Fidel Castro said the explosion was caused by sabotage. He indirectly accused the US of bearing responsibility for the disaster. The American government immediately rejected Castro's "unfounded and irresponsible accusations" and announced a formal protest.

Castro immediately drew parallels with the explosion of the US battleship USS Maine on February 15, 1898, which sparked the Spanish-American War , and accused the CIA of authorship:

Following its pattern of anti-Cuban activities at the time, the CIA is not an implausable suspect, but there is no conclusive evidence it was involved. Other conspiracy theories include an elaborate one circulated at the State Department suggesting it was the work of French terrorists, in retaliation for Cuba´s support of Algeria at the United Nations.

As early as March 17, 1960, at the urging of Vice President Richard Nixon , US President Dwight D. Eisenhower instructed CIA Director Allen Dulles to train Cubans in exile for a covert invasion of Cuba.

On March 15, 1960, Prime Minister Castro inaugurated a memorial in honor of the victims near the site of the accident , which was built from parts of the shipwreck.

History of the ship

The La Coubre was a cargo ship built at the Canadian Vickers shipyard in Montréal. She was part of a ten-ship contract that was ordered in 1946 to rebuild the French merchant fleet, including four sister ships of the La type , whose names all began with the syllable "La". The general cargo ship La Coubre with a load capacity of around 6,150 tons was launched in 1948 for the shipping company Compagnie Générale d'Armements Maritimes (CGAM), a joint subsidiary of the shipping companies Compagnie Générale Transatlantique (CGT) and Chargeurs Reunis , and was transferred to the CGT in 1951.

The wreck of the freighter was recovered and repaired in late 1960. In 1972 the La Coubre was sold to Cyprus and renamed Barbara . In 1977 it was renamed Notios Hellas , then Agia Marina . In 1979 the freighter was scrapped in Gandia / Spain .

During the funeral on March 5, 1960, the Cuban photographer Alberto Korda made the famous portrait of Guevara's Guerrillero Heroico . Jean-Paul Sartre and Simone de Beauvoir , who had been in Cuba for several days at the invitation of the Cuban government , also witnessed the state ceremony . In his address, Castro changed his political motto "Fatherland and Freedom" (patria y libertad), which he had used since the founding of the revolutionary movement of July 26th, for the first time into the variant he has regularly used since then, "Fatherland or death" (patria o muerte) .