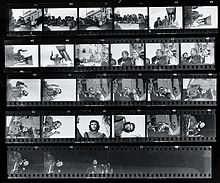 Contact sheet of the 35 mm film with which Alberto Korda photographed Che Guevara as Guerrillero Heroico on March 5, 1960

If a photo is produced from a film using a contact copying process, it is known as a contact print .

Contact prints were the usual method of obtaining a positive , especially in the days of glass photo plates .

A contact print of negatives is usually used for the first quality assessment of the images of a negative film . With the contact print, the negative is placed directly on the photo paper and briefly exposed. The dark areas in the negative allow less light to pass through than the light ones, so that an image with the correct light value, the positive , is created on the print .

Contact prints from small and medium format negatives are usually made for archiving purposes; the corresponding sheets are often filed together with the negatives. In the case of even smaller formats ( pocket film , etc.), on the other hand, contact prints would usually be of no use, as the image content could hardly be assessed even with a magnifying glass.

While contact prints had to be ordered separately in the past, now machine-generated, scaled-down overviews are mostly included in the development of 35 mm and APS film cartridges. In most cases this is referred to as an index print .

If a photo of images and documents is created using the contact copying process, it is called a photocopy . In the second half of the 20th century, the term photocopy also became common for electrostatically generated copies, see electrophotography .

Photocopies are archivable if acid-free and thus archivable paper is used.

With the photogram , objects are placed directly on film or photo paper and exposed.

In photo laboratory technology , contact copiers are offered that work with a vacuum and are equipped with various light sources.

The contact print of large negatives from view cameras results in their own positives, which are usually different from the positives of enlargements: Due to the inevitable stray light in enlargers , the shadows are often dull or the lights are underexposed when enlarging. If there is a contact sheet, stray light cannot develop. The quality of a contact sheet can therefore be significantly better. Until the 1960s, Agfa distributed a special photo paper for contact prints under the name “Lupex”, whose density curve and sensitivity differed significantly from photo paper for enlargements. Other film manufacturers also had such papers in their range.

Various methods of contact copying are hundreds of years old.

A simple form of contact copy known from the Middle Ages is self-printing . Other methods such as salt pressure emerged later .

Blueprint processes produce a photochemical copy from a transparent or thin paper template on a special paper according to the principle of contact copy. In contrast to the photocopy, however, no silver halide is used as the emulsion. The resolution is low.

Both methods use ultraviolet light or sunlight for contact exposure . The light sensitivity of the material used is low, so you can work without a darkroom.

“Blueprint” is often used as a buzzword in a figurative sense, see carbon copy paper # blueprint

In the case of copying processes, a thin paper is pressed through handwritten with a writing implement that is firmly pressed on (such as a ballpoint pen ) or by machine with a typewriter, type wheel or needle printer . A copy paper placed underneath (colloquially tracing paper ) or carbon paper then transfers color to a second writing paper. If carbon paper was used, the copy was black, otherwise blue dye was used ("blueprint"). This method has been previously (for making an exact copy of breakdown called) is used. For example, for handwritten receipts, pre-printed forms or duplicates that were stored as receipts. In today's times with the widespread use of copiers and small printers, duplicate prints are more likely to be made.

With the help of tracing paper , plans and drawings were usually copied, since when copying through it was difficult to control what had already or not yet been copied and an unwanted slipping of the copy could be better monitored. For the production of tracing paper, paper was soaked in oils or gasoline or glassine was used.