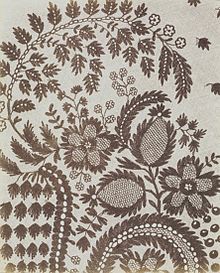 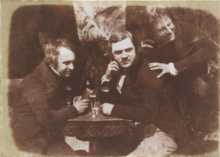 As salt print or fotogenische drawing one is called photographic process ( negative process ) from the early days of photography , that of William Henry Fox Talbot was developed from 1834 to 1839.

William Talbot made his first photograms as early as 1834 . He experimented with different chemicals to capture an image. To do this, he soaked writing paper in saline and silver nitrate solution . This produced light-sensitive silver chlorine . For exposure, he placed objects on the impregnated paper and then exposed it to the sun. So he used the principle of the contact copy .

The objects left stenciled white outlines on the paper, while the rest of the paper turned black. To fix the picture, Talbot used a saline solution again .

He called the resulting photograms photogenic drawings . These are a further development of the process of natural self-printing, which was already known from the Middle Ages (vouched for by Thomas Walgenstein et al.).

At the beginning of the 20th century, the process was rediscovered as a photogram ( Lászlo Moholy-Nagy , El Lissitzky ), schadography ( Christian Schad ) and rayography ( Man Ray ) for artistic photography . Even today, the principle is carried out as a laboratory experiment in the photo laboratory by photo amateurs and some photo artists.

Talbot himself further developed his method of calotype (patent 1841), which was later named "Talbotype" in his honor, and thus created another photographic negative process.