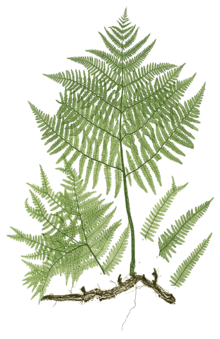 Bracken as a natural print from Thomas Moore, The ferns of Britain and Ireland, 1856

The natural self-printing ( Latin Typographia naturalis ), also physiotype, less often autoplasty, is a printing process in which natural objects, e.g. B. leaves of plants can be used as printing forms . With a thin application of paint, even fine structures are reproduced very precisely. Whole pressed plants, bird feathers, insect wings, flat fossils, etc. can also be used. In addition to decorative or artistic use, natural self-printing was further developed in botany, as it allows detailed images of flowering plants, ferns and algae.

The plant as a printing block

An early example of this simple technique is the imprint of a sage leaf in a Leonardo da Vinci sketchbook (Codex atlanticus). The artist also left notes on the same page about the use of soot, oil and white lead as printing inks. 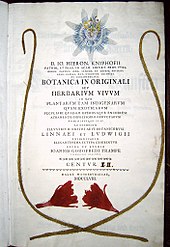 Title page of Kniphof's Botanica in original from 1758

Several herbal books and picture collections with nature prints have come down to us from the 16th century , for example 1517 by Johann Jacob Baier, 1557 by Hieronymus Rosello and 1583 by Theophilus and Johannes Kentmann . However, it is unclear whether the technology was traditional or rediscovered several times.

The first botanist to use natural self-printing on a large scale and to develop it decisively was Johann Hieronymus Kniphof . In collaboration with the Erfurt printer Johann Michael Funcke , he published two editions of the Botanica in original from 1733 , each of which comprised several hundred plates. A third edition, which he produced with the printer Johann Gottfried Trampe from Halle between 1757 and 1767, contained another 1,200 illustrations.

Kniphof kept its preparation and printing technology secret. It is not known how three-dimensional objects, e.g. B. succulent shoots, tubers or cabbages. What is certain, however, is that he often only made the prints softly and in one color and then colored them by hand.

The prints were particularly precise when the plants were macerated beforehand so that the vein network emerged more clearly. A pioneer of this technology was Christoph Jacob Trew .

Since most of the plants were already too badly damaged after just a few passes and details could no longer be reproduced with high contrast, the images were only created in small numbers.

In the 19th century, several famous illustrations on flowering plants, ferns and seaweed, which were produced using new methods of natural self-printing, appeared. Behind this was the desire to produce larger editions and to market the books more successfully. Attempts were therefore made to transfer the objects to more durable printing plates.

The Frenchman Ch. D'Aiguebelle used the still young technique of lithography in 1828 : He pressed blackened plants onto prepared stone slabs and then treated them by etching. Under the title Homographie, ou Choix de 20 plantes indigenes et coloniales , he published a selection of twenty such lithographs in 1828. 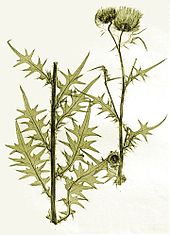 Example of a natural self-print (ordinary thistle) from Ettingshausen & Pokorny

Since 1830, dried plants have been pressed into lead plates and used as printing forms. By applying different colors to a printing plate, particularly lifelike images can be created. From an aesthetic and scientific point of view, they were far superior to the early photographs. The production of metallic printing plates on the basis of real plant prints was consistently further developed in the following years and perfected by Alois Auer Ritter von Welsbach (1813–1869), director of the Vienna State Printing House since 1841 . Auer made a high plate from the lead impression by galvanic means . By electroplating again, he then produced a printable copper gravure plate. The printing process itself hardly differs from that of an engraving . Auer's printer Andreas Worring applied for a patent for the process in 1852 at the kk Privilegienarchiv.

This method was used by the paleobotanist Constantin von Ettingshausen and the botanist Alois Pokorny . Between 1855 and 1873 they published a twelve-volume set of illustrations with the title Physiotypia plantarum Austriacarum . In its first edition it comprises 500, in the second edition 1,000 plant illustrations from the territory of the Austro-Hungarian monarchy . The copper plates, including some previously unpublished pictures, are preserved in the Institute of Botany at the University of Vienna. 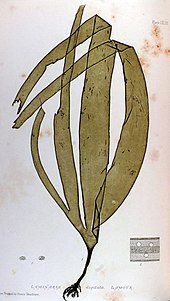 Giant horsetail as a natural self-print