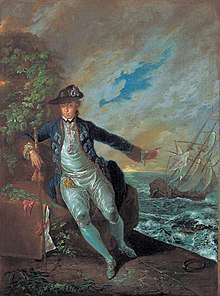 He was the son of a Spanish mother and a Frenchman of Catalan origin. Paret y Alcazar first apprenticed to the French jeweler Augustin Duflos and then to the monk Bartolomé de San Antonio (1708–1782). He studied for four years at the Real Academia de Bellas Artes de San Fernando in Madrid with Antonio González Velazquez , where he won a second prize in 1760 and a first prize in 1766. He also learned from the French painter Charles de la Traverse , who was a student of François Boucher and had accompanied the French ambassador Marquis de Ossun to Spain. From 1763 to 1766 he was in Rome with the support of the brother of King Charles III. , of the Infante Luis Antonio de Borbon (1727–1785) to complete his education. He may also have traveled to France. From 1775 to 1778 he was exiled to Puerto Rico for three years (probably because of the entanglements in the affairs of his patron, the Infante Don Luis de Borbon ), where José Campeche (1751-1809) was his pupil. He then lived in Bilbao for ten years, still banned from Madrid . There he also painted many paintings of religious content. In 1788 he returned to the court.

In 1780 he was accepted into the Academia de Bellas Artes de San Fernando (based on a painting about Diogenes ). The king appointed him secretary to the committee for architecture.

He is best known as a chronicler of events at the Spanish court, as a painter of receptions and festivities, mostly on behalf of the king. In addition to courtly scenes, he also painted port views (also on a royal commission in 1786), landscapes, genre scenes and flower still lifes. He also illustrated the works of Miguel de Cervantes and Francisco de Quevedo . Paret y Alcazar himself had an unusual literary education. He also paints various portraits, including of Maria Luisa of Parma and Charles IV as Prince of Asturias.

In his last years he painted the chapel of San Juan del Ramo in the church of Santa Maria in Viana (Navarra) .