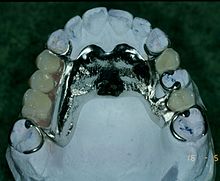 A model cast prosthesis ( denture ), MEG for short, is an inexpensive, aesthetically rather unsatisfactory partial prosthesis . Your metal frame (including the holding and supporting elements - so-called brackets) is made from a chrome-cobalt-molybdenum alloy (in technical jargon: Chro-Ko-Mo , consisting of 65% Co, 30% Cr and 5% Mo) in one piece poured. The prosthetic saddles with the artificial teeth are attached to this very stable framework .

It is indicated as standard care in the event of the loss of several teeth, when fixed dentures are no longer possible and mainly serves to restore the masticatory (chewing), phonetic (speaking) and aesthetic-physiological (appearance and facial expression) function. The prosthesis is a removable denture (so-called absolutely removable denture) and can therefore be cleaned outside of the mouth. If more teeth are lost, it can in most cases be enlarged. The elastic brackets cover the remaining natural teeth or crowns ; the prosthesis saddle rests on the alveolar ridge, which means that the dentures are usually worn periodontally (on teeth) and gingival / tegumental (on gums). The prosthesis should fit optimally in order to rule out leverage and not damage the remaining teeth.

The aim is to create a denture whose kinetics (movement of the partial denture) are as low as possible. Elements that influence the kinetics of the partial denture are the holding and supporting elements (periodontium) and the denture base (tegument). Areas of a tooth that transmit the load forces to the periodontium are named as support zones. The connection of two of these zones (S2 and S3) results in a support line, more than two zones (with S1) result in a support surface - the support polygon. An axis of rotation is present if there is a force-absorbing area outside the support polygon. The axis is formed from the boundary line of the periodontal and tegumental areas. In the case of dental prostheses worn periodontally / tegumentally, attempts are made to place the chewing surface parts that are to be loaded as close as possible to the axis of rotation - e.g. B. by setting up the plastic teeth only up to the first molar . With four-point support (by four brackets; without free-end saddle) there is no axis of rotation, only the support polygon formed from it.

Anchor teeth are determined according to the remaining teeth and their pillar value (tooth condition). In the gap bite, anchor teeth are to be defined at each tooth-delimited section. Shift saddles are usually always clamped mesially and distally (rather not in the anterior region for aesthetic reasons) - free-end saddles always removed from the saddle.

The following are suitable as holding elements: 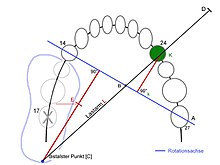 After the impression of the patient's dentition, a master model is produced and mounted with the opposing bite in an articulator . After measuring the working model with a parallelometer , brackets and base or bracket are drawn in and certain areas are erased on the model. Now, by doubling the original models, an investment model is produced on which the metal framework is modeled from precast wax parts. After investing, the muffle is placed in the preheating furnace and heated until the model casting can be poured and then has to cool down slowly. Now the devesting, finishing and metal polishing take place. The dentist then receives the work on the framework try-in. Now the dental technician can complete the prosthesis on the framework with artificial teeth and plastic saddles made of cold polymer.