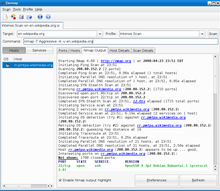 Nmap 4.5 on Windows with Zenmap GUI

Nmap is a free port scanner for scanning and evaluating hosts in a computer network . The name stands for Network Mapper .

Nmap was from an under the nickname Fyodor known hacker originally created for the operating system Linux developed. The text-based program is subject to the GNU General Public License and is therefore free software, but can also be purchased for a fee under an alternative license (for example, to use it within non- GPL software). In addition to the text-based version, there is also the graphical user interface NmapFE for convenient setting of Nmap, which has now been replaced by the GUI called Zenmap , which is based on UMIT by Adriano Monteiro Marques. Although nmap was originally a Unix tool, it is now ported to Windows operating systems. It offers almost the full range of functions, but has some limitations.

Nmap is primarily used for port scanning (ie examining the ports of a host). The tool was constantly expanded and was able to make a name for itself primarily through the active techniques for OS fingerprinting (the detection of the operating system used on the target host). The mapping of environments (detection of active hosts) is also possible. In addition, the services behind a port and their version can be read out with Nmap .

Nmap is very popular with both attackers and administrators because it works very efficiently and reliably. It is an important part of the network diagnosis and evaluation of network-compatible systems. Among other things, it is also used by the vulnerability scanner Nessus to detect open ports.

Nmap in film and television

In some films Nmap happens: In The Matrix Reloaded , the character Trinity hacks using the 2001 discovered SSH1 - CRC32 - Exploit into a power plant after it has scanned the computer with Nmap. In the film Battle Royale is source of Nmap shown. Furthermore, the then beta version 4.01 with the graphical user interface Zenmap is used in Das Bourne Ultimatum . In addition, Nmap was used as a port scanner in the movie Who Am I - No System Is Safe to turn off electricity in a house.