The East West Line ( Chinese东西 线) is the second MRT line completed in Singapore . The line connects the eastern and western parts of the island as well as Changi Airport with the center. The line currently has 31 stations, is 49.2 km long (42.8 km trunk route, 6.4 km airport branch) and is operated by SMRT Corporation . The line color is green.

The first segment of the East West Line, which runs from City Hall to Outram Park, opened on December 12, 1987. The system was started by Lee Kuan Yew to extend the line to Clementi on March 12, 1988. During the construction of the extension to Clementi Station, the roads will need to be realigned for the new MRT line over Commonwealth Avenue and Commonwealth Avenue West. The line was later extended to Lakeside on November 5, 1988. The 15-kilometer eastern extension to Tanah Merah Station was opened on November 4, 1989, and the opening ceremony was attended by then-First Deputy Prime Minister Goh Chok Tong. At this point, the east-west line was formed, reflecting the operational separation of the north-south line, which simultaneously extends to Marina Bay station and uses a green theme.

The 6-kilometer extension of the Pasir Ris line was opened early on December 16, 1989 with a preview. The Boon Lay Station was opened on July 6, 1990 by Goh Chee Wee, MP for Boon Lay, and marks the completion of the first MRI system. 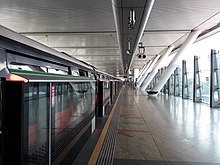 Construction of the new Dover station began in June 1998 between Buona Vista and Clementi. The station building was received with reservations by some members of the public because of the small area it served, and criticism of the issuance of "taxpayers' money" mainly used only by students at an educational institution. Despite some resistance, the Land Transport Authority continued construction to supply Dover housing development to commuters along the Singapore Polytechnic . Dover opened on October 18, 2001. Before the opening, test drives were carried out from October 13-17, 2001, when the trains stopped at this station but did not open their doors. Dover is the first station on the MRT network to be built as a filling station. It was originally called Polytechnic and was later renamed Dover in September 2000.

The idea of ​​extending the Mass Rapid Transit system to Changi Airport was reconsidered during the construction of Terminal 3 at the airport. Earlier plans for a new line branching off the existing east-west line at Tanah Merah had long been planned. Some conceptual plans showed a preliminary alignment of the route to the airport along Airport Boulevard, which leads beyond the airport to Changi Point. before turning southwest back towards the city along the east coast. The plans were finally announced on November 15, 1996 by then-Deputy Prime Minister Lee Hsien Loong . However, the new route alignment showed a departure from previous plans in which the final plan only included the construction of the first two stations of the Expo and Changi Airport, the latter being the subway station between Terminal 2 and Terminal 3. The station's alignment on The airport was also switched vertically in an east-west direction, so that the station runs directly from both ends of the station to two of the terminals. The station designs were unveiled on February 10, 1998. Construction began on January 29, 1999. The Expo and Changi Airport opened on January 10, 2001 and February 8, 2002, respectively, and are currently operated as part of a shuttle service. Before July 22, 2003, Boon Lay's train service began after the opening, but later switched back to shuttle services due to poor patronage. On May 25, 2019 it was announced that the Changi Airport Extension will be converted into the Thomson-East Coast Line Extension (TELe) by 2040.

The Boon Lay Extension was announced on December 29, 2004 and serves residents of Jurong West, Upper Jurong and industrial workers in the Tuas Industrial Estate. Construction began on May 12, 2006 and opened on February 28, 2009. Plans to extend the route to Tuas (Raffles Marina) were planned in 1998, but were not implemented until the Land Transport Masterplan 2008. On January 11, 2011, together with Tuas West Depot, the extension of Tuas West from Joo Koon to Tuas Link was announced. Construction began on May 4, 2012 and was completed on June 18, 2017. The tests were carried out until 2017.

On August 25, 2014, the Land Transport Authority announced that the new platform would be built in Tanah Merah to enable faster journeys and shorter waiting times on the East West Line. The contract was awarded on October 25, 2016 and construction began in 2017. When completed in 2024, it will be the second MRT station after Jurong East to have triple island platforms.

The Pasir Ris rail accident was a train accident that occurred on March 22, 2016 at the intersection near the Pasir Ris, on the east-west MRT line. A C151 train ran at around 60 km / h in two SMRT trains that trained trainees, which resulted in their deaths. The two deceased workers were working on a track signal problem as part of a team of 15 track people at the time. This incident was "the worst train wreck" in the history of the Singapore MRT.

SMRT trains and an SMRT management staff were charged with violating the Occupational Health and Safety Act that led to the accident and fined $ 400,000 and $ 55,000, respectively. The SMRT engineer who led the track team at the scene of the accident was fired by SMRT Trains and charged with negligence which resulted in death under the Criminal Code.

The incident occurred at 11:10 a.m. on March 22, 2016, when a team of 15 employees were deployed to a track switch near the Pasir Ris MRI station to investigate a high voltage alarm that indicated a possible signal failure. The team of 15 track workers walked up to the signaling equipment in a single file to investigate the problem and were given access to the track. The two deceased workers, Nasrulhudin Majumudin and Muhammad Asyraf Ahmad Buhari, were second and third placed on the team, walking as a file on the sidewalk near the third rail. Both were apprentices in SMRT Trains. There was no speed limit or ATC code restriction on this section of the route, and there was no railway guard to warn drivers of the presence of workers on the route. The feeder train, of which it is C151, was in automatic mode under Westinghouse ATC and accelerated to a speed of 60 km / h.

The two deceased employees, a supervisor, and at least one other track worker crossed the third track and onto the track to access the signaling equipment. A senior officer on the team then noticed the train and yelled to move. Members of the team tried to jump back onto the sidewalk and seek refuge. The train driver noticed the track workers and tried to apply the emergency brake. However, the train hit both Nasrulhudin and Muhammad Asyraf. Nasrulhudin was crushed under the train, while Muhammad Asyraf was hit by the train, which was blown 5 meters into the air. Both employees suffered multiple injuries and were pronounced dead at the scene. The service between Tanah Merah and Pasir Ris was then suspended for 2.5 hours, affecting 10,000 commuters.

On November 15, 2017 at around 8:18 a.m., 2 C151A trains collided at Joo Koon. A train error resulted in the first train in the direction of Tuas Link stopping at the station. A minute later, a second train stopped behind the first and then "continued unexpectedly", which led to the collision. 34 passengers and 2 SMRT staff members suffered minor to moderate injuries and were referred to Ng Teng Fong Hospital and National University Hospital. This is the second such incident since August 5, 1993, the first occurring in the collision of two C151 trains at Clementi. The transition should take place in October 2017 when the Downtown Line opens.

The accident increased public outrage and pressure on SMRT Corporation and the Land Transport Authority (LTA) over a major incident in the tunnel flooding that led to the discovery that SMRT maintenance workers had and had not performed the necessary maintenance on their pumps Falsified records. Both organizations described the accident as a train "coming into contact" with another train in their first media releases, and this has been criticized by commentators and the public as an attempt to downplay the incident. Transport Minister Khaw had apologized to workers in Jurong and opposition parties called for either an investigation or the resignation of the Transport Minister.

As a result, train services between Tuas Link and Joo Koon stations were temporarily interrupted in both directions for 2 hours on the day itself and for the whole day on November 16, 2017, resulting in trains going west to terminate at Joo Koon station.

According to an update from the Land Transportation Authority (LTA) & SMRT dated November 16, 2017, LTA and SMRT have decided to stop operating the Tuas West Extension, which runs on the new signaling system, for up to a month from the rest of the East West Line, which runs on the old signal system is running. This will allow LTA engineers to work with Thales to conduct further security checks. Train service on the line was resumed on November 20, with the Tuas West Extension between Gul Circle and Tuas Link replacing the new signaling system and the section between Pasir Ris and Joo Koon and the Changi Airport branch on the old system. The train connections between Joo Koon and Gul Circle have been interrupted and a free intercity bus is available. It is expected that the service between Pasir Ris and Tuas Link will not resume until mid-2018, as soon as the route uses the new signaling system.

Following the investigation, SMRT announced that operating hours for the east-west and north-south areas will be reduced to facilitate maintenance and the full transition to the new signaling system. From November 29, 2017 to December 25, 2017, 17 stations on the east-west line from Joo Koon to Outram Park and Jurong East to Choa Chu Kang from the north-south line were closed at 11 p.m. on Fridays and at 8 a.m. on Saturdays Saturdays and Sundays, and some days are completely closed.

From January 8, 2018 to February 24, 2018, the stations from Outram Park to Pasir Ris and Changi were also closed for the same reasons. The only possible alternative is the Downtown Line .

Lines of the MRT network in Singapore