The title of this article is ambiguous. Further meanings are listed under Mob (disambiguation) .

“Mob” is an old, disparaging, polemical abuse word that was used to discredit other people who did not conform to the prevailing culture. The elitist undertone is expressed today in the verb “pöbeln” and is intended to justify exclusion from democratic discourse. 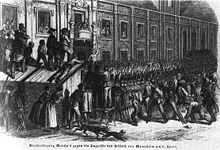 Defense Mathys against the attacks of the Mannheim mob on April 8, 1848

The term pöbel ( mhd. Povel, bovel ) was borrowed from the old French ( poble ) in the Middle Ages . He referred to servants or simple people. This old French word goes back etymologically like the then coexisting peuple " people " back to the Latin word populus "people". The word "rabble" usually implies a lack of culture , sophistication , intelligence , style , sensitivity, or a "sense of higher things".

This is followed by the verb "(an) pöbeln", which is generally understood to mean a very vulgar " turn on " with an insulting effect.

The ochlocracy is translated with mob rule.

In his work “Against the robbery and murderous groups of farmers” (1525), Martin Luther gave the violence against the “rabble” a divine justification: “The donkey wants to be beaten and the rabble wants to be ruled by force. God knew that, so he didn’t give the authorities a foxtail, but a sword. ”In the 19th century, the word“ rabble ”was still used for the“ class below class honor ”, according to the social historian Werner Conze .

In his lectures on the basic lines of the philosophy of law (1820) by Georg Wilhelm Friedrich Hegel , the “rabble” appears in the section on the police (Die bürgerliche Gesellschaft, § 244/245). In the history of democracy, the reference to the “rabble” was a justification for the exclusion from the right to vote. In 1831, the Prussian reformer Freiherr vom Stein warned the provincial parliament of Westphalia about the danger “arising from the growth in the number and demands of the lowest classes in bourgeois society. In the cities this class consists of the homeless, propertyless mob, in the country it consists of the mass of little kötter, brinkitzer, new farmer, resident, hirelings; it nourishes and harbors envy and greed ”.

In 1844, the entrepreneur Friedrich Harkort declared in his pamphlet “Comments on the obstacles to civilization and the emancipation of the lower classes” that it was about “rescuing the proletarians from the shame and misery of the mob”. On the other hand, while studying Hegel's philosophy of right , Karl Marx developed the concept of the proletariat , to which he ascribed a historical role in the realization of philosophy. Empirically, in the labor movement, the term “proletariat” was used to distinguish the hard-working, educative and organizational part of the people from the rest of the “rabble”, for whom Marx coined the word lumpenproletariat .