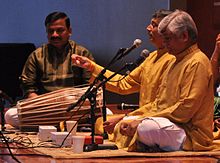 Pakhawaj ( Hindi पखावज ), also pakhavaj, mrdang, is a double- headed drum of North Indian music that is struck with the hands.

The pakhawaj is an asymmetrical double-cone drum and is similar to the south Indian drums mridangam and maddale , the north Indian dholak , the northeast Indian khol , the Nepalese pashchima and the slimmer pung in Manipur .

The heads are attached to the wooden body with a V-cord tensioner. The drum is tuned with wooden blocks under the bracing. The skins have different sizes. The higher skin is provided with an eye made of a black voice paste on the outside . Before the game, the bass head is weighted down with a moist paste made from flour or semolina.

Due to the complex structure of the skin, the pakhawaj can produce a differentiated sound spectrum. The player sits cross-legged on the floor and the instrument lies across in front of him, the bass head on the left.

The pakhawaj belongs to a type of drum whose shape Bharata described as ankika ( Sanskrit , "lying on its side") in his musicological work Natyashastra . It is mainly played in the classical music of northern India . Because of its deep, powerful sound, it is used in particular to accompany the venerable and serious singing style Dhrupad and the rudra vina , but can also be played as a soloist. It is also used to accompany the Kathak , a north Indian dance . In the less strict classical khyal style, it was replaced by the tabla , a pair of kettle drums .

The pakhawaj how the tabla own drum language, each stop has a onomatopoetic syllables ( bol ). The Pakhawaj player can recite a composition without a drum and memorize the rhythms.