In India the dance has a religious origin. In Hindu mythology , dance is a sacred act, an activity that is older than the earth itself. Shiva , the god of creation and destruction, is said to have destroyed and re-created the world with his dance ( Nataraja ). Accordingly, dances were originally performed in honor or for the joy of the gods; only later did the ritual dances develop into forms of entertainment. 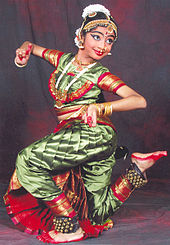 There are many regional dances in India, of which the Bharatanatyam , the classical Indian dance, is the best known. This solo dance form comes from Tamil Nadu and is now popular across the country. In the past, however, it was banned because of its proximity to temple prostitution . In Bharatanatyam, unlike in ballet , one does not strive "upwards" in order to achieve the effect of absolute lightness, but specifically prefers earth-related, almost heavy-looking movement. However, there are also very dynamic and fast rotations, but they are always earth-related. To be able to dance this dance well and expressively, you need years of hard training , which is physically very demanding. The dance is difficult to learn as almost every muscle twitch has its own meaning (there are up to nine movements of the eyes and eyebrows).

Kathak dancer performing chakkarwala tukra , one of the highlights of the dance
→ Main article : Kathak

Kathak is a dance style that is particularly common in northern India, Punjab and the state of Uttar Pradesh . It developed from the 13th century, most of the songs dealt with the life of Vishnu and Krishna. As a result of the Muslim rule of the Mughals, however, the themes and music of the Kathak changed fundamentally, since this art form was now mainly performed in courts, where local artists met Persian and Arab musicians. In addition to the religious, secular topics were also taken up.

Kathakali is predominantly located in the southern Indian state of Kerala . Kathakali is considered to be one of the oldest dance forms. It's a spectacular mix of drama , dance , music and ritual . Characters with vivid painted faces and elaborate costumes to tell stories from the Hindu - epics Mahabharata and Ramayana . Kathakali is traditionally only danced by men, including the female roles.

The dance drama Kuchipudi is not related to the Bharatnatyam, but is an independent art form that has developed from the dance drama tradition of the Indian state of Andhra Pradesh . It contains virtuoso tricks, for example dancing on a brass tray and at the same time balancing a vessel with water on the head. Kuchipudi mostly tells from the life of Krishna and Vishnu . Until the 1970s, all roles in the dance drama were played by men. Women were accepted for the first time in 1967 by Kuchipudi master Vempati Chinna Satyam at his dance academy, where he and other masters developed an independent solo dance form.

Manipuri comes from Manipur , a state in northeast India on the border with Burma. In Manipur, surrounded by mountains and geographically at the crossroads between Southeast Asia and the Indian subcontinent, a form developed with its own specific aesthetics, values, conventions and morals. The cult of Radha and Krishna in ras lila and the dance form pung cholom are of central importance. Dancers wear small bells on their ankles to accentuate the dance rhythm. In contrast to other classical Indian dance forms, the feet are also not hit hard on the ground. Movements of the body and feet and facial expressions in the Manipuri are subtle and graceful, which in turn resemble the Burmese style.

Like the Kathakali, the Mohiniyattam solo dance form comes from Kerala . However, this is danced by women and tells of the incarnation of Vishnu as " Mohini ", the divine seductress. The theme of female love is illustrated by flowing movements and robes. Like many dance styles, Mohiniyattam had almost been forgotten by the early 20th century. 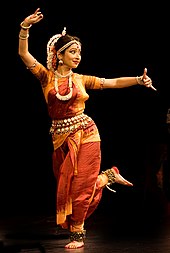 Odissi is originally a temple dance that was danced by the Mahari in the temples of Odisha . Later, this form of dance performance came from the temples to the rulers' courts and then "onto the streets" among the people, where it was originally performed by men dressed as women. Odissi is characterized by flowing movements, statue-like poses, aesthetic beauty and grace.

Sattriya or Sattriya Nritya developed in the 15th century in Assam , in northeast India. In the second half of the 19th century, it became known and spread outside the temples as well. Sattriya was originally only danced by men.

Chhau is a folk dance tradition that emerged from the art of war and has evolved into classical forms. There are four regional styles in eastern India. Seraikella chhau is cared for in the small town of Seraikella in the state of Jharkhand , Purulia chhau in the neighboring district of Purulia in West Bengal and Mayurbhanj chhau in the northeast of Orissa . The tribal dance Midnapur chhau in West Bengal is less well known . Except for Mayurbhanj chhau , all styles are mask dances.

Yakshagana is a dance theater performed with heavily made-up actors on the southern coast and the adjacent mountains of Karnataka , which is musically accompanied by singing and the two drums Chande and Maddale . Its roots are mainly in the narrative style of Tala Maddale and in the Bhuta spirit cult. Traditional performances take place in the open field during the dry season and last all night.

In addition to the centuries-old traditional dance forms, the modern dance style of Bollywood films ( Bollywood dance ) is very popular in India. It was created by the Indian film industry and is danced to modern Indian film music. The movements of this dance are more similar to the oriental dance of the Arab world than to the classical Indian dances.