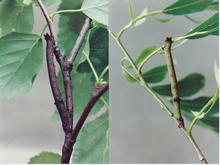 Polyphenism describes the emergence of different, discrete (clearly delimited) phenotypes (characteristics) from a genotype (set of hereditary factors) due to different environmental conditions. It is a special case of phenotypic plasticity .

Another commonly used term for polyphenism is flipping modification. If a population is to be named separately, in which the same phenotype is always pronounced regardless of the environmental conditions, the term monophenism is rarely used.

The term polyphenism was coined in 1963 by the evolutionary biologist Ernst Mayr . According to its definition, polyphenism is “the appearance of several phenotypes within a population, the differences between which are not the result of genetic differences”. It is based on the fact that certain environmental factors interact with the genome and is thus related to other forms of influence on certain genes by external factors, such as epistasis , in which other genes, and sexual dimorphism , in which genes at sex-determining loci (or theirs, respectively Gene products) determine the expression of other genes. Despite the similar sound, the term is not related to or synonymous with polyphenia (more commonly referred to as pleiotropy), the phenomenon that a single gene can influence several different phenotypic traits. Polyphenism describes a subgroup of changes that are summarized under the umbrella term phenotypic plasticity . Another group of changes that fall under this umbrella term is described by the term acclimatization .

The special feature of polyphenism - in contrast to acclimatization, for example - is that it is limited to discreet deviations in development. Gradual deviations, such as height or weight, are not included, although they are also dependent on the environment. Discrete deviation occurs when an environmental factor such as temperature or food switches a development process to another, alternative development process.

Polyphenism is a special case of phenotypic variation , the occurrence of individuals with different expressions and combinations of characteristics within the same species. Morphological polyphenism is also often referred to as polymorphism , even if, strictly speaking, the (genetic) polymorphism is actually defined quite differently Differences are named that go back to different gene variants (technically called alleles ) or these genetic differences themselves, while in polyphenism the genes are the same, only expressed differently depending on the environmental conditions. But also the biological terminology is often inconsistent in this regard. In the case of environmentally-related modifications, the term “seasonal dimorphism” is widely used instead of “seasonal diphänism” (more correctly according to the definition) - that is, polyphenism is not understood as an opposite, but as a subgroup of polymorphism. This inconsistency has essentially historical causes. In the real world, manifold interactions between polymorphisms and polyphenisms can also be observed, which in the concrete example do not allow a clear assignment in every case. In an aphid species, for example, the development of the wings in the females correlated with the environmental conditions, i.e. it was a classic polyphenism, but also depended on an allele that is known to cause the development or the absence of wings in the males, i.e. one classical polymorphism. Such cases are probably very common, but difficult to detect.

Well-known examples are (a) seasonal Polyphenism at butterflies with seasonal different pigmentation (see FIG. Seasonal dimorphism ), (b) polymorphism in the gender distribution . This can be evolutionarily advantageous if a different sex share in a species can maximize the reproduction rate under different conditions or (c) the caste system of state-forming insects with eusociality , with polyphenism between reproducing and non-reproducing individuals. In bees , the queen is not determined genetically, but rather through high-quality nutrition in the early development phase.

In many plants (e.g. arrowhead , water crowfoot ), morphologically different overwater and underwater leaves form on the same plant depending on the location and environment - an example of leaf polymorphism controlled by environmental conditions .

Polyphenism based on genetic accommodation

How polyphenisms can evolve cannot be explained in most cases. In an interesting experiment, Yuichiro Suzuki and H. Frederik Nijhout succeeded in breeding a form in the caterpillar of the tobacco hawk Manduca sexta by selection in the laboratory from a normally lethal color mutant, in which the caterpillars either colored green (like the wild type ) or depending on the temperature are colored brown; this is similar to the situation in the related Manduca quinquemaculatus , in which this polyphenism occurs naturally. The level of the juvenile hormone could probably be made as the basis of the color morph ; the genetic basis is probably a mutation within a regulatory cascade that regulates the hormone level, the effect of which is normally masked under the influence of a heat shock protein , but is now pronounced in the breeding line. In this case, it was possible for the first time to experimentally create a polyphenism through genetic assimilation . Some researchers speculate that this association may be more common but has so far been underestimated.