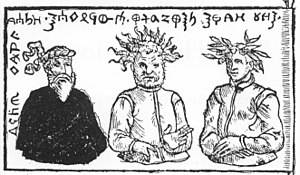 Potrimpos was a god of the ancient Prussians .

While most sources briefly describe the Prussian god Potrimpus as the god of flowing water and springs, Simon Grunau gives a more detailed description of the god in his Prussian Chronicle, although his information is considered unreliable. According to this, Potrimpos is a god of luck who was worshiped at the holy evergreen oak in Rickoyto together with Perkunos and Patollos . In his honor a snake is worshiped at the oak in question, and it is sacrificed with milk in a pot covered with sheaves. The same three gods are represented on the flag of King Widowuto :

"... one of them was like a young figure, ane bardt, crowned with sangelen (ears of corn) and frolich irbot and the god of grain and his name was Potrimppo"

The relationship between Potrimpus and two other Prussian god names is unclear. As early as 1418, the Collatio episcopi Warmensis mentions that the pagan inhabitants of Prussia worshiped the "Patollum Natrimpe" and other monstrous spirits. While the Sudauer Büchlein describes the Potrimpus as the god of flowing water, Autrimpus is “the god of more and of great sight” and is equated in the agenda with the Roman sea god Neptunus . Bardoayts are also joined as "the ship god", whom Johannes Malalas equates with the Roman port god Portunus .

Since the syllable -trimp- cannot be explained from the Baltic, it remains unclear how the gods Potrimpus, Autrimpus and Natrimpe are to be interpreted and how they relate to each other.