This article describes the lemma legal area in the spatial scope of certain legal sources. See legal field as a branch of law 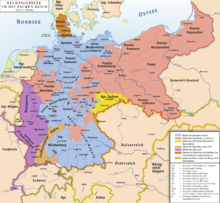 A field of law can be viewed as the spatial scope of certain legal sources . In such a context, however, the concept of the legal system must be observed.

The spatial use of the term “legal area” was important in Germany up until the 19th century , because before the civil code came into force, there was still a legal fragmentation . The Private Law in particulate German empire was divided at that time; so there was B. Areas of law in which the Prussian general land law , the civil code or common law were valid. Legal areas in the spatial sense and the national territory do not necessarily have to coincide. This is particularly clear nowadays in matters of space law .