Outside the fairway, the upper and lower lights appear clearly offset 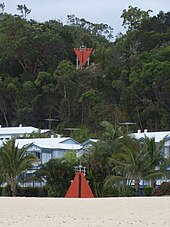 When heading in the leading light line, the upper and lower lights are one above the other ( Moreton Bay near Brisbane )

Leading lights are a subtype of beacons and are used to indicate a fairway to a watercraft .

Leading lights usually consist of two beacons, the top and bottom lights; in rare cases a central fire is added. The upper and lower lights are designed in such a way that a certain affiliation with one another can be seen from a greater distance. They are positioned on the coast in such a way that, from a ship within the safe fairway, both beacons can be seen on deck bearing , i.e. they appear to be exactly one above the other. The so-called course line is called the guiding light line.

Because the lower light is closer to the fairway, it is often designed a little smaller than the upper light further away, which is located higher up. In this way, both parts of the leading light appear about the same size from the ship. In order to make it clear that the two fires belong together, even at night, synchronized identifiers are normally used that are matched to one another , so that the interruptions in the upper fire coincide exactly with the interruption in the lower fire. The color and range of the two fires are also usually the same. The identifiers and the exact alignment of the leading light lines are noted on nautical charts .

If incoming and outgoing ships travel slightly offset to starboard from this leading light line, collisions can be avoided without having to use additional technical aids.