Appearance of the Massed Pipes and Drums in 2009

The Massed Bands play The Bonnie Lass o 'Fyvie in 2007 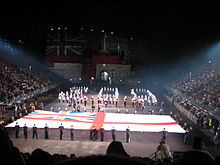 Lightshow at Edinburgh Castle during the Edinburgh Military Tattoo

Performance by the civil Top Secret Drum Corps from Basel

The Royal Edinburgh Military Tattoo (from English tattoo = Zapfenstreich ) is the largest music festival in Scotland . It is part of the Edinburgh Festival and has been held every August since 1950 on the square in front of Edinburgh Castle (the so-called Esplanade ) in the Scottish capital, Edinburgh .

Originally, the Edinburgh Military Tattoo was exclusively dedicated to military music . Today it has a greatly expanded program. In addition to the still dominating military part, civilian dance and song performances have also been shown for a number of years. Most of those who appear are still members of the British armed forces .

All performances last around an hour and a half. Traditionally fixed - as Scottish - components of the program are the performances of the Massed Pipes and Drums , the Highland Spring Dancers and the Lone Piper . The Massed Pipes and Drums are a formation of around 180 bagpipers and drummers composed of several military bands especially for the Military Tattoo. The approximately 80 dancers of the Highland Spring Dancers mainly show dances to traditional Scottish music. The Lone Piper plays on the battlements of the castle in memory of the fallen in the British Army.

The rest of the program changes annually and is presented by international bands, bands and dance formations. The conclusion and highlight each year is the mass appearance of all participants, with the British anthem God Save the Queen and the Scottish song Auld Lang Syne being played. The Black Bear and Scotland the Brave are traditionally heard when marching out .

More than 1,000 musicians and dancers can be watched live by around 8,600 spectators. For this purpose, special grandstands are set up on the Esplande every summer and are removed again in September. The performances take place Monday to Friday at 9:00 p.m. and on Saturday at 7:30 p.m. and 10:30 p.m. There is only no performance on Sunday. Tickets are often sold out months in advance. One performance per year has been televised since 1968 and is now seen by an estimated 100 million viewers worldwide. In Germany, the BBC production is regularly broadcast on NDR with German commentary .

The Edinburgh Military Tattoo is under the auspices of Princess Anne and is not a commercial event. The surplus generated annually through the sale of around 217,000 tickets is donated to charitable organizations.

The Edinburgh Military Tattoo was or is under the direction of: