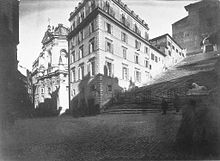 Former location north of the stairs to Santa Maria in Aracoeli, 1887

The Sala Santa Rita , a secular former Catholic church in the Italian capital Rome , is now used as a cultural center.

The building is located in the city center in Rione Sant'Angelo on the south side of Via Montanara at its confluence with Via del Teatro di Marcello, which runs to the east . A little further south is the Marcellus Theater .

The baroque church was built around 1653 according to plans by the architect Carlo Fontana on the site of a medieval church of S. Biagio de Mercato or de Mercatello . However, it was located north of their current location near the stairs to Santa Maria in Aracoeli . The octagonal church on the inside became the seat of the brotherhood of S. Spina della Corona di Nostro Signore Gesù Cristo under Pope Alexander VII , and the name Santa Rita da Cascia was added later .

In the course of the construction of Via del Mare , today's Via del Teatro di Marcello , the church was dismantled in 1928. From 1937 to 1940 it was rebuilt at the current location. In 1952 the building came to the order of the Sons of Divine Providence . From 1990 onwards the city of Rome used it for cultural events and exhibitions, until 2001 it was closed for restoration work. The restorations began in 1999 and dragged on until mid-2003. The outer facades were cleaned and the original color was restored. The nave and the upper rooms of the building have also been restored. The ship had previously been unusable due to falling parts and plaster. Also stucco work and decorations from the 17th century, which had partly survived the implementation of the church have been restored.