The Sayyad-1 ( German : 'Jäger 1') is an Iranian anti-aircraft missile , which is essentially based on the Soviet missile S-75 Dwina. 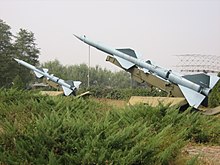 The photo shows Chinese HQ-2 missiles, which were the model of Sayyad 1.

The first successful test by the Iranian Army took place on April 14, 1999. A spokesman for the Iranian Defense Ministry said the missile was named after Ali Sayyad Shirazi . Sayyad Shirazi died in an assassination attempt in 1999. The Sayyad-1 missile is a copy of the Chinese HQ-2 system , which is a modernized version of the Soviet S-75 Dvina complex from the 1950s. Other sources also suspect technological influences from Western missiles, such as the US MIM-23 HAWK and Standard Missile 1 (SM-1) . Both Hawk and SM-1 were shipped to Iran from the US before the Islamic Revolution.

Iranian state media portray the missile as a still powerful air defense system. Because the Soviet "grandfather" of the anti-aircraft guided missile comes from the 1950s, it can be assumed that the allegedly modernized variant Sayyad-1 probably does not reflect the current state of air defense technology.