The slush is a special plaster mold casting method for casting green bodies , blanks or cast bodies to fire ceramic products are suitable. Slip casting is used, for example, in traditional porcelain production . 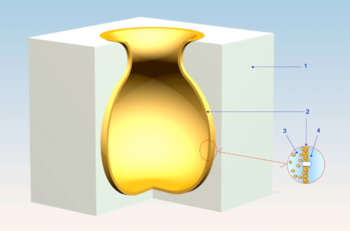 The slip , a mineral-water mixture of defined viscosity , is poured into plaster molds that have been carefully dried beforehand. The plaster of paris quickly removes water from the slip, which means that the mineral components are deposited on the plaster of paris form, compacted and increasingly solidified. After reaching a certain level of plastic strength, the divisible plaster molds are carefully removed. The slip casting is mainly used in the porcelain industry.

Plaster of Paris molds are usually made in so-called mold foundries according to a mother piece. They are coreless and can consist of several individual parts with different levels of division. Usually, however , two-part forms with a dividing plane are used for symmetrical pieces, for example for vases . The longer the slip (also known as the mass) remains in the mold, the thicker the deposit layer becomes. As soon as the intended wall thickness is reached, the excess slip is poured out of the mold. The plaster molds are dried and used for further casting cycles. When the highest permissible wear tolerance is reached, the plaster mold concerned is replaced.

The still moist green bodies can optionally be retouched or reworked. In porcelain production, this is followed by the steps of glow firing, applying the glaze, smooth firing and decor firing. Many bulk articles are manufactured using slip casting. Particularly fragile individual parts such as fingers, ribbons or cup handles can be glued on with paste-like material.

The flow of the liquid in the slip through the porous plaster of paris mold during the slip casting process can be described one-dimensionally with the aid of Darcy's law :

where is the permeability of the plaster of paris form, the viscosity of the slip and the pressure gradient in the slip.

The application of Darcy's law results in a parabolic course for the layer thickness of the deposited solid slip ( cullet ) over time :

The methods of ceramic shaping differ mainly in the viscosity (characterized by the addition of water) of the porcelain mass or slip used. A distinction is made between the following basic types of shaping in porcelain production: