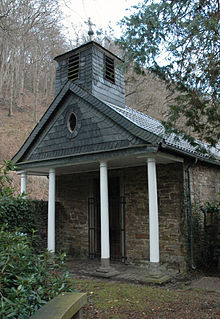 Today the chapel is looked after by the parish of St. Markus in Essen-Bredeney. It was donated by Theodor von Leythe, consecrated after Saint Magdalena and as a castle chapel belongs to Baldeney Castle , the former seat of a ministerial of the Werden Abbey . Its appearance goes back to a renovation in the 16th century, while the interior dates from 1821. The canopy supported by columns probably also dates from the 19th century. The castle chapel belongs to the parish of St. Ludgerus. The interior furnishings date from the time of the re-consecration in 1821. After the restoration in August 1994, the chapel was opened for services again. On August 16, 2015, she received a new altarpiece.