This article describes the term key as used in database theory. The term key as a search criterion for searching in data sets is explained in secondary keys .

A key used in a relational database to the tuples (records) a relative to identify (table) clear to them numbers . A key is then a group of columns that is selected in such a way that each table row has a unique combination of values ​​above the values ​​of this column group.

In the theory of relational databases, one or more key candidates are required per entity , which by definition must be unique. From these key candidates, one candidate is selected as the primary key and implemented as such when the entity is converted as a database table. Notwithstanding this convention, there are also database systems that allow table definitions without a primary key being defined. Such tables therefore also allow duplicate data records and are therefore not relational entities by definition.

Super key ⊇ key candidates, from these the primary key is selected

In relational databases one differentiates between the key terms

Super key (sometimes also called upper key)
Set of attributes (fields) in a relation (table) that uniquely identify the tuples (rows) in this relation, ie always contain different values ​​for tuples selected in pairs (one also says “are unique”). A trivial super key, for example, would be the set of all attributes of a relation in common . (Trivial because a relation is a set of tuples. The elements of sets must be unique, so there cannot be two identical tuples in a relation.)
Key candidate (also called candidate key or alternative key )
A minimal subset of the attributes of a super key, which enables the identification of the tuple (key candidates ⊆ super key).
Primary key
The selected key candidate that will be used to map the relations. The values ​​of this key are used as foreign keys in referencing tables .

Let a certain relational scheme R (the table framework, i.e. all columns) be given. A subset S of the attributes (of the columns) of the schema R is called a key if:

Uniqueness
R cannot contain two different tuples where the values ​​of S are the same.
The aim is to ensure that no (possible) expression of R can contain two different tuples in which the values ​​of S are the same: No technically legal, possible filling of the table may result in two (technically different) lines leading to the same key value.
Definition
Some database systems allow null values, provided that this does not violate the uniqueness.
The aim should be that all entries in the table actually define the attributes from S; none of the entries should be NULL .
Minimalism
For a key to be a key candidate, no real subset of S must already meet the uniqueness condition.

a
Here the key is a single attribute. The ISBN is very suitable for this, because no two books have the same ISBN. Books can very well have the same title or come from the same author. Note: The ISBN ( International Standard Book Number ) is shown here only symbolically as a sequential number, an ISBN is actually more complicated.
b
Here a combination of two attributes is used as a key. The developer of the database assumes that there are no customers with the same name and their birthday on the same day. If there are customers in this example who have the same name and have their birthday on the same day, then the part of the attributes selected here cannot be used as a key.
c
Here only all attributes of the relation come into question as keys. The personnel number shows which employee of a company is the superior of which other employee. Note: The data records of this relation only contain left-unambiguous tuples (1: n), because for technical-content-related reasons employees usually only have one direct superior. In principle, of course, tuples of relations that are relation types can contain all possible n: m assignments.

The term full functional dependency - represented by  - is used here. Here A is fully functionally dependent, which means:

In contrast to the super key, only those attribute sets are considered here that can no longer be reduced without losing their key properties; they are also said to be minimally identifying . The following key candidates result for the example relations in the introduction:

From the list of super keys, those that are minimal were selected. Occasionally, the term is candidate key is used, which is a literal translation of the English technical term candidate key is.

In order to be able to clearly identify the tuples (= rows) in a relation (= table), a primary key is specified for the relation - one of the key candidates. The primary key is usually selected in such a way that it is as small as possible, that is to say comprises as few attributes as possible or has a data type that is as simple as possible. It should be stable over time, so its values ​​should not change during the entire life cycle of the tables concerned, as this would also entail changes to the associated foreign key values ​​(which is possible in principle through so-called cascading, but is often complex).

In addition, the selected primary key must actually allow the real objects that are represented by the tuples of the relation to be clearly identified. For example, if you select the combination {name, birthday} as the primary key, you also specify that there may not be two people with the same name who have their birthday on the same day (uniqueness, uniqueness). The introduction of surrogate keys (artificial keys, e.g. a sequence number) will avoid this problem in any case. The following primary keys are suitable for the example relations from the introduction (are key candidates ):

Provided that no surrogate keys are to be introduced, the decision in examples b) and c) is irrelevant, because there is only one key candidate; consequently this must also be used as the primary key. In example a), {ISBN} is chosen as the primary key, because this is the smallest key (in contrast to {author, book title, ...} it has only one attribute), and it also accurately reproduces reality. If a primary key consists of several attributes, one also speaks of a combined ( also: composite) primary key or a compound key . By selecting the primary key, all other key candidates of the relation automatically become alternative keys . In our example relations these would be:

The purpose of alternative keys is to enforce uniqueness for all key candidates in the table, not just for the primary key. (This means that alternative keys are in principle suitable to be used in a different relation as a reference to a foreign key).

Secondary keys are groups of attributes that are often used to describe single and multiple tuples (search term). For example, the postcode in an address table can be used as a secondary key.

Secondary keys are implemented in the database by secondary indices (simply “indices” in everyday language). A secondary index is an optional, additional search structure of a database that makes tuples easier to find by avoiding searching through the entire database (similar to the index of a book, through which terms can be specifically found).

It is possible that all key candidates of a relation consist of several attributes, or that all key candidates only insufficiently reflect the actual situation. One such case is b) of our examples. If you want to identify a person in the Customer table, you must always enter their name and birthday at the same time. It is therefore often desirable to introduce an additional attribute that serves as the primary key: This is called an alternate key (Engl. Surrogate key ). For example b), a business identification number such as “customer number” or a sequential number would be appropriate. 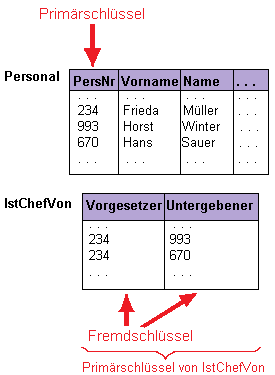 A foreign key is an attribute or an attribute combination of a relation that refers to a primary key (or key candidate) of another relation or the same relation.

It serves as a reference between two relations, i.e. That is, it shows which tuples of the relations are related to one another in terms of content. Examples of foreign keys are the two attributes “superior” and “subordinate” from the example relation c) of the introduction: The “personnel number” of an employee is specified here. But there is little that can be done with such a number in everyday life; much more important are name, department, employment and similar information. Therefore, there will most likely exist another relation that contains attributes such as {personnel number, name, department, employment, ...}. This relation will also most likely have the primary key {personnel number}; it is therefore advisable to use the personnel number as a foreign key.

An attribute set is compatible with another if the value ranges of the attributes involved are the same, i.e. dom (α) = dom (β) .

The following terms are not keys in the sense of relational databases:

Keys can also be differentiated as natural or artificial keys according to the category of their derivation.