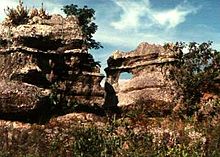 Algae of the Caño Cristales river

Serranía La Macarena is a national park and a mountain range in Colombia located in the department of Meta on the territory of the municipalities of La Macarena , Mesetas , Vista Hermosa , San Juan de Arama and Puerto Rico .

The National Park consists of a 130 km long mountain range that is independent of the three Andean - Cordillera has arisen and is one of the most important refuges for the local nature. Founded in 1948, it extends over 6,200 square kilometers. The most famous feature is the Caño Cristales river , which is characterized by different colored plants.

In the Macarena you can find anteaters , pumas , deer , species of monkeys , 500 species of birds , 1200 species of insects and 100 different reptiles . 48 types of orchid and 2000 other flowers and plants are native there.

La Macarena is home to some archaeological sites with pre-Columbian pictograms and petroglyphs .

The FARC guerrilla group is still building a road through this national park that crosses the Caño Cristales River , among other things . In addition, approx. 45 km² will be planted with coca. On August 4, 2006, the Colombian state began to spray these coca fields with the environmentally hazardous glyphosate using airplanes . Until then, the plants had been pulled out of the ground by hand. Since its inception on January 18, 2006, the FARC had murdered 28 people who were involved in the removal of the plants.