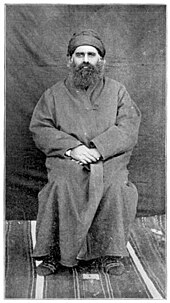 The son of Benyamin Shimonaya (alias d'Mar Shimun ) was born in 1861 (or 1860), according to prevailing custom, as the successor of his uncle, Mar Abraham Shimun XIX. (approx. 1820–1860 / 61), appointed Catholicos of the “Patriarchate of the Mountains” of the East Syrian Church. The Syrian manuscript 4119 in Strasbourg calls it “107. Patriarch on the cathedra of Mar Thomas , Mar Addai and Mar Mari ”.

For four decades he served as the ecclesiastical and secular head of his religious community and the Assyrian tribes . He rejected Ottoman proposals to separate the two functions. His term of office was marked by the increased appearance of western clergy and growing tensions between Kurds and Christians in the Hakkari. His relations with the Ottoman authorities were trusting and were rewarded with high awards.

In 1862 he consecrated a local bishop, Mar Abdisho (Antonius) Thondanatta († 1900), for the anti-Latin opposition of the Syro-Malabar Thomas Christians.

Like its six predecessors, Shimun XX. Buried in 1903 in the Mar Shalitha Church of Qudjanis. All his successors found their grave abroad during and after the First World War . The original heir to Shimun XX. intended bishop Mar Auraham (Abraham) (1862-1915) fell out of favor from 1895 for family and political reasons. Therefore, when Shimun died XX. the office to his 15-year-old nephew Benyamin Shimun XXI. over.