The title of this article is ambiguous. A description of the Slavín Memorial in Prague can be found under Vyšehrad Cemetery 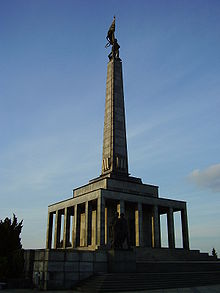 Slavín is the name of a war memorial and cemetery in Bratislava in honor of the Soviet soldiers who lost their lives during the conquest of Bratislava in April 1945 during World War II . It is located on a mountain in the western part of the old town of Bratislava .

The memorial designed by Ján Svetlík was built between 1957 and 1960 on the site of a Soviet honorary cemetery and opened to the public on April 3, 1960, on the 15th anniversary of the city's liberation. In 1961 it was declared a national cultural monument.

The area consists of: