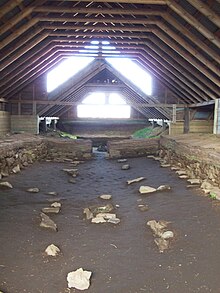 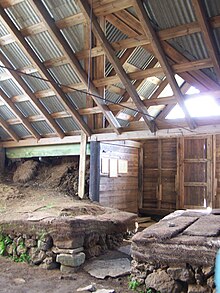 Detail of the foundation walls 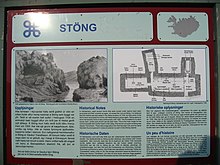 Information board on site

Stöng are the excavated foundations of a Viking Age Icelandic homestead.

The courtyard with nave in Þjórsárdalur was probably buried under ash in 1104 when the volcano Hekla erupted .

In 1939 the remains of the nave, as well as a forge and a cow shed were uncovered.
The stone foundations of the house were roofed over to protect against wind and weather in 1957 and can be visited.
Further excavations in 1992–1993 brought to light a church that dates from the same period as the nave.
About 5 km southwest of the excavation site, a reconstruction of the Stöng courtyard and church was built, the Freiljóðveldisbær open-air museum .

Stöng is one of the best preserved medieval buildings in Iceland and is particularly important because it is a rare example of the wooden construction previously practiced in Iceland, which later had to be abandoned due to a lack of building materials.

The excavation of Stöngs under the direction of the Danish archaeologist Aage Roussell was part of a whole series of excavations in the summer of 1939. Five more courtyards and one cemetery were uncovered in Þjórsárdalur and two courtyards in Borgarfjörður in western Iceland .

The Þjórsárdalur archaeological research program was one of the most important in Iceland in the 20th century for several reasons: