Citizenship of the United States

The following important information is missing from this article or section:
Descent principle, adoption; see. en: United States nationality law # Acquisition of citizenship
Help Wikipedia by researching and pasting it . 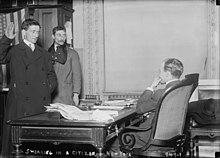 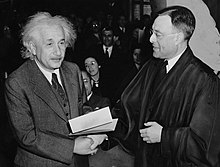 The first sentence of the Declaration of Independence of 1776 already speaks of “one people” of the “United States”. However, the declaration of independence did not constitute a federal state , but merely a confederation of thirteen independent states, each of which claimed its own nationality. This changed with the constitution of 1787, which came into force in 1789.

Acquisition and loss of citizenship

All persons who were born on the soil of the USA receive American citizenship by virtue of birth ( birthright citizenship ), see birthplace principle , with the exception of the children of "ambassadors, non-American embassy staff, foreign government members and noble houses on state visits", see 14th Amendment to United States Constitution, definition of “citizen” . Children who were born outside the United States, but whose at least one parent is US citizenship, also automatically receive US citizenship under certain conditions, regardless of which state they are in. To do this, however, they must submit a consular report on the birth of a citizen of the United States of America abroad ( Consular Report of Birth Abroad of a Citizen) from the parents or the parent with American citizenship at a nearby US embassy or consulate of the United States of America (CRBA), also known as Form FS-240 ), which documents that the child is a US citizen.

Another way to gain US citizenship is through naturalization .

Unmarried children under the age of 21 living in the USA acquire American citizenship by law, that is, without an application and automatically, as soon as at least one parent is naturalized in the USA. The child can then immediately apply for an American passport. In addition to the parent's Certificate of Naturalization (Form N-550), the child's green card and birth certificate must also be presented. The fee for a passport book is $ 115 (as of 2020).

Completely independently of this, a Certificate of Citizenship (Form N-560 or N-561) can - but does not have to - be applied for. To do this, form N-600 must be completed and submitted; In addition to a variety of systems, Form N-600 also has a fee of $ 1,170 (as of 2020). Authorities require proof of American citizenship on certain occasions, such as applications for Medicaid . As a rule, it is sufficient to present a US passport.

Worldwide taxation of US citizens and green card holders

As one of only two countries in the world (the other is Eritrea), the US binds tax liability to citizenship, i.e. H. US citizens are liable for tax in the US even if they have lived abroad since birth and have never entered US territory. Due to the FATCA agreement, many foreign banks have to pass on the data of their US customers to the US tax authorities. The same rules apply to green card holders.

To waive American citizenship, you must have filed an American tax return for five years and you must have fulfilled the FBAR obligation in the previous six years. Therefore, following the Streamlined Foreign Offshore procedure is not even sufficient for this. The IRS wants to determine whether no tax motive plays a role in this step. After that, an appointment can e.g. B. at the American consulate in Frankfurt agreed to waive: Renunciations & Relinquishments. To process this application, the consulate charges a fee of US $ 2,350, which must be paid to the consulate.

For the assessment period in which the American citizenship is waived, a tax return (1040) and an FBAR must have been submitted by the time of submission. At the same time, a form (IRS Form 8854) must be filled out in which the waiver provides the tax returns for the past five years and all of his possessions. If the tax returns have not been submitted, the passport may be withheld, but the person is not yet released from American tax liability. If the total property at the time of the waiver is more than US $ 2,000,000, or the waiver has not filed a US tax return for the past five years, or their average tax liability over the past five years was over US $ 168,000 (2019), in some cases an EXIT Tax can be considered. 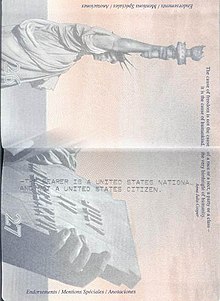 Note in the passport of a US national

Persons born in American Samoa or Swains Island are US Nationals by law , but not US citizens. They may neither vote nor be elected outside their area of ​​birth. However, just like US citizens, they are allowed to:

US Nationals applying for US citizenship are subject to the same rules and criteria as green card holders.

When traveling abroad, you will receive a US passport with a reference to your US Nationals Status.