The Ljubljana City Museum ( Mestni muzej Ljubljane ) is the main museum dedicated to the history of the capital of Slovenia and its environs. It is located in the Turjak Palace, Gosposka ulica 15, the Auersperg Palace from 1642. 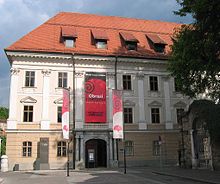 The Turjak Palace, seat of the museum

Skull from one of the gothic graves discovered in Dravlje, east of Ljubljana

The museum was founded in 1935 in Palais Auersperg in the center of the city, but renovation work did not begin until 1937. After the Second World War , further cultural institutions were added there, but private apartments were also set up. Between 2000 and 2004 the structure was completely restored.

A series of excavations were carried out between 1995 and 2003 at the site where the museum rises, while the courtyard and basement were renovated. Artifacts from the Urnfield Culture , then the later Hallstatt and Latène times , from the Roman Empire and the subsequent epochs appeared. War graves from the middle Latène period were discovered during the excavation campaign in 2002, as well as a sewer system that had been in operation for 2000 years until the excavation.

Model of the ancient Emona, founded in AD 14

A permanent exhibition presents the city's history, which dates back to around 4500 BC. Began with a wetland settlement . A special feature is a 40,000-year-old arrow and the oldest wheel in the world equipped with a wooden axle, made around 3350–3100 BC. The wheel was discovered in Ljubljansko barje , the Ljubljana moor around the city. It has a diameter of 70 cm, the wooden axis is 120 cm long. On the occasion of this find, a special exhibition was held from 2013 to 2014 that dealt with the history of the wheel over the past 5200 years.

In addition to the site of ancient Emona, the museum's branches include the tobacco museum in the former cigar factory on Tržaška Street, a room for work on Ivan Cankar on Rožnik, and the Oton Župančič memorial collection in the Oton Župančič library - both are reminiscent of Slovenian writers. All conservation measures are carried out in the Ščit. Since 2016, the museum has held a permanent exhibition on the ecology and history of the Ljubljanica River in Vrhnika , where some of its headwaters are located. This is where the 40,000 year old arrow is kept, which is the oldest artifact of Homo sapiens in this area.