Steam Whistle (dt. Whistle ) is a Canadian brewery of Toronto , which is the only product of the same name a beer after Pilsner style brewing. 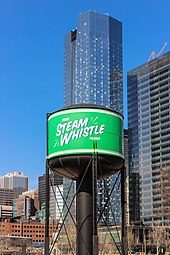 Water tower at the brewery in Toronto

The founders, Greg Taylor, Cam Heaps and Greg Cromwell, worked for the Upper Canada Brewing Company and were laid off as a result of restructuring. The idea of the brewery Three Fired Guys (dt. About three-fired boys ) to name soon dropped in favor of the current name. On the beer bottles, however, there is an embossing 3FG which refers to the original name.

The brewery is located in the John Street Roundhouse , a Grade I listed roundhouse , in downtown Toronto in the immediate vicinity of the CN Tower . The brewery has two of the eponymous steam pipes, a smaller one in the building and a large one on the roof, which whistles every hour.

Steam Whistle operates a fleet of promotional vehicles from different eras, some of which have been converted to modern drives (e.g. electric drive).