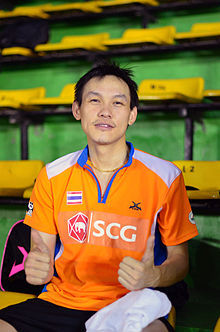 As a junior, Prapakamol had his first major success when he was third at the 1998 Junior Badminton World Cup in doubles with Phattapol Ngernsrisuk . In 2004 Sudket Prapakamol started in mixed for the first time at the Olympics. There he had a bye in the first round with Saralee Thungthongkam , but lost the second game and finished ninth. In their second participation in 2008, both made it to the quarter-finals. In the men's doubles with Patapol Ngernsrisuk , however, he was eliminated in round one in 2004.

In 2005 he won the Asian Championships in mixed with Saralee Thungthongkam . The Japan Open both finished victorious in 2005. In 2006 there was bronze at the Asian Mixed Games and a title at the Philippines Open . At the Badminton World Cup in 2006 , both were able to fight for the bronze medal. At World University Championships, Prapakamol won three gold medals in 2004 and 2007.

Nationally he won with his named partners for the first time at the Thai championships in 2003 in men's doubles and in mixed. Two more titles in doubles followed until 2006, five more in mixed until 2007, whereby he started with Kunchala Voravichitchaikul in 2004 and not with Saralee Thungthongkam .