The former synagogue in Aurich existed from 1810 to 1938. SA men and other National Socialists destroyed the building during the November pogroms in 1938 . The site on which the synagogue stood is now used as a memorial.

Memorial stone for the burned down synagogue

Jews are first mentioned in Aurich in 1635. As of 1657, the local congregation reached the required number of ten male worshipers for a minyan . A general letter of conduct issued by Count Ulrich II in 1645 allowed them to live according to their own “Jewish order”. In 1670 Princess Christine Charlotte had a general escort letter written in which the Jews were allowed to hold church services in their homes or in their own synagogues . The Aurich congregation then carried out their services in an annex to the court Jew's private house on Langen Strasse.

Towards the end of Prussian rule, the community wanted to build a new synagogue building. In order to be able to finance this, she had already received permission for a collection from the War and Domain Chamber in 1807 . During the Napoleonic era , the community finally built a 9 × 17 m synagogue at Kirchstrasse 13 based on plans by the architect Conrad Bernhard Meyer , which was consecrated on September 13, 1811. Donations from all over the city financed the construction. As early as the 1840s it became too small for the growing community. In 1911 the synagogue was renovated and expanded. 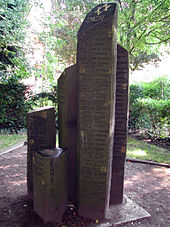 Memorial stone for the murdered Jews from Aurich

After the National Socialists came to power, the Jews were deprived of their rights and persecuted. Already on March 29, 1933 armed surrounded SA men's synagogue and forced the surrender of the Schächtmesser to this then burn in the marketplace. Without these kosher slaughter knives, the Jewish butchers could no longer practice their craft here. Nevertheless, the services were still well attended until 1936.

During the November pogroms in 1938 , SA men set the building on fire. The Aurich chain of command ran through the Emden-based leader of the Aurich SA storm Georg Eltze. The Emden district leadership of the National Socialist German Workers' Party (NSDAP), which in turn had been instructed by the Gauleitung in Oldenburg and the SA North Sea , had probably called him at home between 11 p.m. and midnight and gave him general information about the planned actions. Eltze immediately informed the Aurich district leader Heinrich Bohnens, discussed the further measures with him and then set off with several SA men on the way to Aurich. At the same time he organized the procurement of gasoline in Aurich. Meanwhile, Bohnens informed the Aurich fire department and informed them that an exercise would take place. Therefore, the fire alarm system should be shut down. When Eltze finally arrived with his men on the Aurich market square, the Aurich SA and the district leader were waiting there. After a brief briefing, part of the troop went to the synagogue and locked it off. Then Eltze and his SA men started a fire in the building in the early hours of the morning. It burned down, along with the Torah scrolls and prayer books in it.

The fire brigade who had arrived was instructed to prevent the fire from spreading to a neighboring private house and the Jewish school. The synagogue burned down to the ground. At the same time, the Jews began to catch up in the city. To this end, some of the SA troops had been instructed on the market square to “arrest Jews regardless of age and gender” and to intern them in the agricultural hall. There they were abused and abused. SS men and members of the National Socialist Motor Corps (NSKK) as well as SA troops from the neighboring villages of Holtrop and Westerende were also involved in this action. Elderly, infirm, women and children were allowed to return to their destroyed homes at noon on November 10th. The men who stayed behind, around 50, had to wait in the hall's projection room until noon without getting any food or drink. Afterwards, their tormentors took them to Ellernfeld, where they were humiliated, harassed and tortured with sports and other drill exercises. In the course of the afternoon the SA released more men. She took the other 42 men under 60 years of age into protective custody and locked them in the judicial prison. On November 11th they were finally deported via Oldenburg to the Sachsenhausen concentration camp , from which they could only return weeks later. The last Jew from Aurich returned to the city in January 1939. The community quickly disbanded after the November pogroms. About 30 Jews fled to the Netherlands, about 25 to the USA, 17 to Palestine, nine to England, four to Australia and one person each escaped to Italy, Switzerland and Sweden. The last Jews left the city in the spring of 1940. On April 18, 1940, the Aurich district administrator reported to the district president that "there are no longer any Jews living in the rural districts of the district or in the city of Aurich [...]". After the synagogue was destroyed, the ever-smaller congregation held its services in the apartment of the teacher widow Amalie Wolff, née. Pious, through. After the confiscation of the school building, private rooms of the last Aurich synagogue head Abraham Wolff had to be used for school lessons.

The synagogue site remained desolate for a long time after the end of the Second World War. In 1948 the incidents in connection with the pogroms of November 1938 were investigated by the Aurich jury. The four accused, the NSDAP district leader Heinrich Bohnens, the painter Hermann Theesfeld, the businessman Karl Rector and the government chief secretary Harm Flügge were accused of arson, breach of the peace, serious deprivation of liberty and crimes against humanity. Bohnens received a three-year prison sentence, which was also justified by the fact that he could be proven to have actively participated in the arson. In addition, his civil rights were revoked for a period of four years. Theesfeld received a year in prison and Rector ten months. Flügge was in detention because of his "membership in the corps of political leaders". He stayed there until June 19, 1948, and an active involvement in the arson has not been proven. In the years 1949/1950 another trial took place in Aurich in connection with the riots during the pogrom night. 28 other people, including a woman, stood before the court. They were accused of crimes against humanity, breach of the peace and deprivation of liberty. There were hardly any witnesses to support the allegations. Others who had previously testified withdrew their testimony in court. The court finally pronounced the verdicts on February 16, 1950. Eleven of the defendants received terms of between seven months and one year in prison, ten cases were dropped under the Impunity Act of 1949, and seven were dropped because of lack of evidence. None of the eleven convicted had to serve their full term.

In the 1970s, the processing of the history of the Jews in Aurich began. A first memorial stone was erected on the site of the synagogue. Since 1992 basalt columns with names have been commemorating the Holocaust victims from Aurich. It was designed by the Aurich stonemason Bernd Clemenz. The known life dates can be seen on the broad sides, while the names of the camps to which they were brought are listed on the narrow long sides. Clemenz designed a pillar flat at the top so that he could lay a stone. On November 9, 2007, the stonemason added another stone pillar to the memorial, bearing a model of the Aurich synagogue.