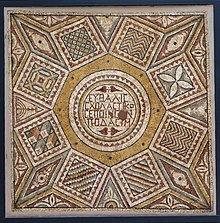 One of the largest mosaic fields was donated by Euthalis, the Scholastikos (Cinquantenaire Museum, Brussels)

"Eupithis had this area made, on the basis of a vow, for her well-being and the well-being of her husband, her children and her whole household." ( National Museum Damascus )

The Synagogue of Apamea was an ancient synagogue in Apamea on the Orontes . It was located on the great Kolonnadenstrasse ( Cardo ) southeast of the intersection with the Decumanus , so in a very central location. It was built in the late 4th century, but destroyed after a few decades.

The synagogue was excavated in 1934 during the fourth excavation campaign of the Mission Archaeologique Belge led by Fernand Mayence . Since an inscription mentions the year 703 of the Seleucid era (392 AD), the mosaic floor could be precisely dated. However, the excavation reports of the Belgian team were destroyed in two fires in the Musée du Cinquantenaire in Brussels in 1944 and 1946, so only the preliminary reports have been preserved.

The main room measured 15.5 × 9 meters and had a square niche in the south wall, which probably served as a Torah shrine . The floor is covered with several mosaics that are purely geometrical except for a menorah . In this respect, the synagogue deviates from the synagogue-building tradition in Syria and Palestine , "which tended towards pictorial representations on mosaic floors."

The numerous Greek inscriptions are unique and indicate how many feet of the mosaic floor were donated by a donor or in honor of a family.

The following appear as dignitaries: the chairman of the Antiochen Council of Elders, several synagogue rulers , an elder (presbyter), a chasan and a deacon. Nine times women appear as donors alone and three times together with their husbands.

In the fifth century, the atrium church, also known as the cathedral and consecrated to Kosmas and Damian, was built over the destroyed synagogue, initially a simple apse room. It was enlarged and embellished after the earthquakes 526 and 528. "The deliberate conversion of diaspora synagogues into churches demonstrates the political power that Christianity had now gained."