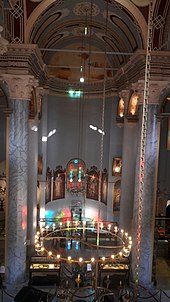 Interior after the restoration

The Taksiyarhis Church ( Turkish Taksiyarhis Kilisesi , Taxiarch Church ' , from Greek Ταξιάρχης Taxiarchēs / Taxiarchis ) is a Greek Orthodox church of the 19th century on the island of Alibey Adası (Cunda) off the Turkish coast near Ayvalık , which used to be mainly was inhabited by Greeks .

The Taksiyarhis Church was built in 1873 on the foundations of a previous church. It was dedicated to the taxiarches , i.e. the archangels Gabriel and Michael . In 1927 the building was converted into a mosque , the iconostasis removed and the frescoes painted over. However, the building was so badly damaged in an earthquake in 1944 that it was abandoned. The building has been a listed building since 1989. In 2011 it was extensively renovated and opened on May 31, 2014 as the Rahmi M. Koç Museum Ayvalık .

The cross structure with a central dome is built in the neoclassical style. During the renovation it was painted yellow.

Of the bells in the two bell towers only one remains: After the persecution of the Greeks in the Ottoman Empire in 1914–1923 in the province and their final expulsion in 1923, the bell of the remaining bell tower was used during the Second World War to alert the population and to inform. This bell is now in the Museum of Bergama .