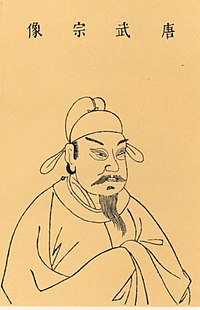 Tang Wuzong ( Chinese  唐武宗 , Pinyin Táng Wǔzōng ; * approx. 810; † 846 ) was the 15th emperor of the Chinese Tang dynasty , he ruled from 840 to 846. Posterity will remember him primarily as a fanatical Daoist who Persecuted people of different faiths.

Before the beginning of his rule, the influence of the eunuchs was so strong that they often made the practical political decisions. Several of Wuzong's predecessors had been murdered by them. However, with the help of his uncle Xuānzong and the chancellor Li Deyu , Wuzong succeeded in asserting himself against the eunuchs and limiting their influence.

Wuzong, who was himself a fanatical Daoist, took a military success over the Uyghurs in the west of the empire as an opportunity to forbid their religion, Manichaeism . This was followed by further repression against other religions ( Nestorian Christians , Mazdaism ) and finally against Buddhism, which was already widespread and popular in China at that time . Many temples that had amassed great fortunes were destroyed and their property confiscated by the state, which was in serious financial difficulties. However, the practice of the Buddhist religion was still permitted to a very limited extent.

Wuzong died in 846 at the age of 36. His uncle Xuānzong succeeded him, and at the beginning of his term in office he ended the persecution of the Buddhists.