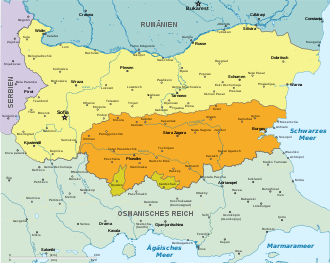 The Tophane Treaty ( Bulgarian Топханенски акт / Topchanenski Akt) was a treaty between the Principality of Bulgaria and the Ottoman Empire , with which on March 24th July. / April 5, 1886 greg. the unification of the Principality of Bulgaria with Eastern Rumelia, which was de facto completed in autumn 1885, was internationally recognized. Tophane is the name of the district of Istanbul , at that time still Constantinople , in which the ambassadors conference met.

The treaty was signed by the envoys of the great powers as well as by the Ottoman Grand Vizier Kıbrıslı Mehmed Kamil Pasha and the Bulgarian Foreign Minister Ilija Zanow in the Topkapı Palace . According to the Tophane Convention, the Prince of Bulgaria Alexander I received sovereignty over Eastern Rumelia . In return, the Ottoman Empire received parts of Eastern Rumelia: Kardzhali and the surrounding region, as well as 21 villages in the valley of the Watscha River (Bulgarian Въча, a right tributary of the Mariza ), in which predominantly Pomaks lived (a total of 1,640 km²). Today these villages are located in the Bulgarian municipalities of Dewin and Borino, the village of Mugla (Bulgarian Мугла) in the municipality of Smoljan (all in Smolyan Oblast ).