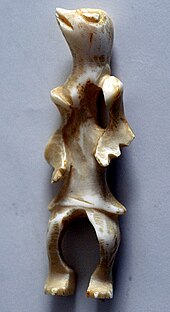 The Kalaallisut word Tupilak (or Tupilaq , plural Tupilait ) means soul or spirit of a deceased and nowadays describes a mostly not more than 20 centimeters tall, mainly carved from walrus ivory artificial figure with various, unusual shapes. This sculpture actually represents a mythical or spiritual being; but usually because of its grotesque appearance it has become a mere collector's item.

Tupilait probably knew the first people who settled Greenland more than 4,000 years ago. At that time, however, they were only supposed to have been spiritual, incorporeal spirits. In historical times, Tupilait evidently became more and more troll-like beings with animal and human features. According to one report , when he was in Ammassalik , East Greenland in 1884 , the Greenland researcher Gustav Frederik Holm asked to describe the strange spiritual being to him. When the interviewees were unable to draw a tupilak on the earth, they would have carved it in wood. Since then, the Tupilaite, which is now produced all over Greenland, has been around.

In Greenlandic Inuit mythology, the tupilak was brought to life by people through secret ceremonies in order to target and even kill an enemy. To do this, the Tupilak had to follow the enemy everywhere and be able to move well in all elements. Accordingly, it is reported that the tupilak originally consisted of a leather pouch in which various symbolic objects were placed, e.g. B. bird feathers as a symbol for air, polar bear claws for land and a sperm whale tooth for water. When speaking magic formulas, there was no mistake, so as not to aim the Tupilak at the wrong target.

The relevant literature also states that magicians (by no means just shamans) created Tupilak figures from various materials such as earth, seaweed, animal bones, human hair and even parts of children's corpses. For this purpose, they had collected the relevant materials in a secret location and put them together or tied them together to form an unusual figure. They would then have given them magical powers with magic spells and by touching their own sexual organs. They were then given to the sea, where they began to develop their power.

The Tupilait created in this way were considered extremely dangerous. They were feared and hated because of their inherent spiritual abilities, as they were always used with hostile intent and mostly in secret. It was therefore hardly possible to counter the invisible powers unless one had a stronger tupilak that could strike back. Using a tupilak has always been a gamble.

Today all such Tupilait have disappeared, as they were made with the help of inconsistent materials for good reason: They shouldn't fall into the wrong hands.

The oldest surviving tupilaites came from East Greenland; they were made of wood and wore animal hide belts. In the meantime, Tupilait have long since become known beyond East Greenland, and they are also produced in the rest of Greenland, sometimes in an artistic, sometimes simply handcrafted manner. Wood is still used as the simplest material, but the more valuable pieces are mostly walrus ivory or reindeer antlers and are carved in East Greenland.

The more grotesque and creepy the sculptures are, the easier it is for them to sell, and so a kind of tupilak industry emerged in East Greenland from the 1950s to the 1970s, producing almost as if off the production line. In the meantime, many artists have returned to giving the figures their own creative forms. While materials from the sperm whale used to be used as raw material, today, in addition to caribou antlers , mainly ivory tusks from walruses and narwhals are used for species protection reasons . Serpentine is also increasingly being used as a starting material. The commercial tupilaites almost all date from the 20th and 21st centuries.