The water meadows in Oberaargau are the last remnants of a form of cooperative meadow irrigation and fertilization that was formerly widespread in the Swiss Plateau . They are typical for large parts of the former cultivated land . They are best trained today in the river valleys of the Langeten , Önz and Rot. The origin can be traced back to the 9th century. Its emergence goes back mainly to the amelioration of the Cistercian monks from the St. Urban monastery in the 13th century . 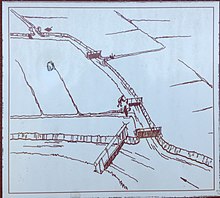 Representation of the principle of watering, recorded from an information board in the Melchnauer Wässermatten

Widespread systems of canals and ditches of various order levels were created for meadow irrigation. Dams were poured and main irrigation ditches with brooks (sluices), side ditches with ablations (water outlets), Wuhren (weirs) and dust savers were built.

In the valley floors, the real water mats were created with versatile ditch systems and in the side valleys the ablating mats with simple ditch systems. The water mats used to be the most valuable cultivated land. The meadow land was several times a year, i. H. watered three to four times (in spring, after bringing in hay and emd in summer or late autumn). Thanks to the suspended matter that was washed up with it, it was fertilized at the same time. The small relief that defines the landscape was created by the fine, permanent deposits of the water. The irrigation was carried out according to old laws: land register entry, documented water law, regulations and sweeping regulations. The main trenches and brooks were maintained by the Wässermatten cooperative in the community and the side trenches with the associated facilities were maintained by the respective managers. The bank protection is to this day partly the task of the pushers.

The extensive irrigation of the meadows in the Langeten, Oenz and Rottal valleys created a near-natural cultural landscape of special character. Characterized by large areas of grassland - mostly natural meadows - and many hedges and individual trees along the waterways and moats. Alders, willows, bird cherries, ash trees and individual, striking oaks structure the landscape. Many animal species find their habitat here, such as carrion crow, buzzard, mallard, wood pigeon, gray heron, woodpecker and lark or many amphibians. The water mats are also important for the groundwater, because the level in the valley fillings is controlled by the meadow irrigation. In the lower Langetental, 87% of the groundwater comes from precipitation and underground tributaries, 10% from the creek bed and floods and around 3% from the infiltration of the water mats.

Today's landscape of the Wässermatten was created through centuries of field work. But there is still space for trees and hedges within the intensely tended grassland and water systems. This is how this natural cultural landscape could develop.

Well-known painters chose the subject "Wässermatten". So bored Ferdinand Hodler often (1853-1918) at a young age with his uncle Friedrich Neukomm Langenthal. The beauty and character of the water mats provided him with motifs for the most beautiful of his early landscapes.

View of the Melchnau water meadows

The water mats are worth protecting not only because of their beauty, rarity and uniqueness. These melioration systems are also a valuable cultural and historical monument from the Middle Ages. The cultivation battle in World War II, intensive cultivation, mechanization and the use of artificial fertilizers all led to the impending demise of the water mats. In 1980, barely a tenth of the former 700 hectares in Langetental were left.

Therefore, years ago, various personalities campaigned for the preservation of this landscape worthy of protection. After water mats were eliminated as protection zones in local planning, regional and cantonal structure plans, the government council resolution of 1985 gave decisive impetus, and the grand council decision of 1991 created the legal and financial basis for the preservation of some typical areas of the water mats in Oberaargau.

The foundation for the protection of the water mats was established in 1992 . Since then it has concluded management contracts with 60 water farmers. From the interest income from the foundation capital, the foundation compensates the managers for additional expenses and reduced income.

In 1994 the canton of Lucerne joined the foundation with around 15 hectares of water mats in the Rottal, in the municipality of Altbüron . Two years later, the directly adjacent Matten von Melchnau was added, and in 2002 three more areas in Altbüron and St. Urban. For the time being, a total of around 105 hectares are contractually secured.

For the first time in this form of integral landscape protection, not only is an area protected, but the type of use belonging to it, that of irrigation, is also maintained.