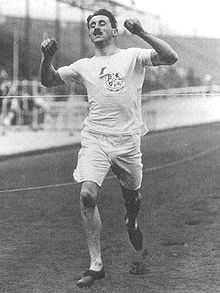 Wyndham Halswelle won the gold medal in the 400-meter run in a walkover in 1908 because the American John Carpenter was disqualified and his teammates John Taylor and William Robbins did not compete in protest.

Walkover , abbreviated w. o. ( English also walk-over or w / o ; dt. without a fight (kl) , literally: "walk", analogously: "easy game"), describes the circumstance when a player wins because his opponent does not start and the game is counted as lost for him. Occasionally the term is also used in the case of a victory by giving up or disqualifying the opposing player.

The term originally comes from horse racing . After all opponents had already been eliminated, the last remaining participant only had to cross the finish line ("walk over the line") to claim victory. So he was able to finish the race “on a walk”.

Anyone who enables their opponent to walkover “has w. o. given ".

The term is also used in badminton , boxing , billiards , baseball and tennis .