The Weiler-Atherton algorithm is a method from computer graphics for calculating the masking of polygons . 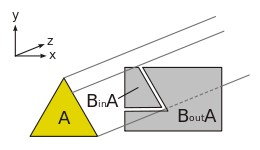 The first step of the Weiler-Atherton algorithm is to sort all polygons approximately according to their z -coordinates. Polygon A , which is closest according to this rough sorting, is now used to clip all polygons against A and to divide them along its contour. This creates two lists: an "inner list" that contains all the polygon parts that are located within the clipping polygon A after projection ( B in A in the example image on the right ), and an "outer list" with all parts outside ( B out A in the example image ).

In order to be able to process polygons that overlap one another, the algorithm uses a stack memory . This contains all clipping polygons whose processing was interrupted due to a recursive call. If a polygon is found that is before the current clipping polygon, it is first looked for in the stack. If it has already been entered there, no recursion is necessary because all polygon parts within and behind this polygon have already been removed.