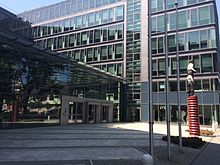 With a balance sheet total of 26.171 billion euros, the Westdeutsche-ImmobilienBank Group achieved pre-tax earnings of 121.2 million euros in 2008, the best result in its history.

The bank was also active in the private mortgage lending business in Germany, but withdrew from new business in early 2009 due to fierce competition.

As part of state aid proceedings for the parent company WestLB , the EU Commission issued the condition on May 12, 2009 that it had to sell its subsidiary WestImmo by 2011. In December 2011, sales negotiations between WestLB and the US financial investor Apollo Investment Corporation failed . In the course of the break-up of WestLB, WestImmo stopped new business on June 30, 2012 and was transferred to Erste Abwicklungsanstalt in August / September 2012 .

On May 20, 2014, Erste Abwicklungsanstalt announced the start of a new sales process for WestImmo-Bank. In order to increase the chances of selling, assets that do not fit the intended focus as a pure Pfandbrief bank were transferred to Erste Abwicklungsanstalt with retroactive effect from January 1, 2014 (so-called carve-out). On February 22, 2015, the EAA announced the sale to Aareal Bank . The transaction was completed with effect from May 31, 2015.