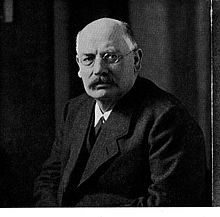 Wilhelm Weule is the name of a company that was founded on April 1st, 1896 in Goslar and manufactures optical components.

The company was founded by Wilhelm Weule, a son of Johann Friedrich Weules from Bockenem . The aim of the production was the manufacture of optics for the lighting of lighthouses on the German North and Baltic Sea coasts .

The first polished lenses and ship position lights were delivered as early as autumn 1896 .

Wilhelm Weule was able to present his products to a broad public for the first time at the World Exhibition in Paris in 1900 . At the Quai d'Orsay , Wilhelm Weule presented optical lenses, Fresnel lenses for ship position lights and beacons . For this he received the silver medal of the world exhibition.

In 1901 Wilhelm Weule acquired a park-like factory site at the gates of Goslar. The existing buildings there were adapted to the needs of a glass grinding shop. It was important to use the existing hydropower with turbines and water wheels. These buildings are still part of the operating rooms today. Soon afterwards, a mechanical workshop was set up in which machines for grinding glass were made. In 1910 a new machine house and a new grinding room for larger glass rings were put into operation.

At the beginning of the 20th century, the collaboration between Wilhelm Weule and Walter Körte was particularly important for the company. On behalf of the Prussian state, Körte repeatedly purchased optics from the Wilhelm Weule company, for example the optics for the Greifswalder Oie lighthouse with a focal length of 900 mm. This beacon is the largest optics ever made in Germany for a German lighthouse.

In 1937, Gerhard Weule, the son of Wilhelm Weule, was an industrial representative at the third intergovernmental meeting of the heads of the navigation mark administration in Berlin. At this conference standards and guidelines for the navigation system were developed and adopted.

After 1945 fewer and fewer beacon optics were manufactured and Wilhelm Weule shifted his production to new fields of production. The manufacture of concave mirrors became more and more important. Furthermore, another business field was opened in the field of signaling technology for the railways. Wilhelm Weule was able to cover the demand for aspherical lenses.

Today Wilhelm Weule produces mirrors and lenses for a wide variety of applications. The combination of two different concave mirrors is state of the art in the field of cinema projectors and is produced by Wilhelm Weule. Solutions for optical problems are developed in cooperation with research institutions. The solar furnace of the German Aerospace Center in Cologne was equipped with mirrors from Wilhelm Weule.