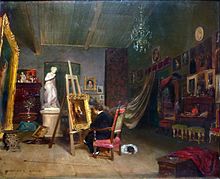 Christian Wilhelm Heinrich Theodor Wider (born February 16, 1818 in Groß Stepenitz , Pomerania , † October 15, 1884 in Berlin ) was a German painter . The burial took place on October 18, 1884 in Berlin in the St.-Matthäus-Kirchhof. Wider was a student at the Berlin Academy and Prof. Otto, later he attended the Antwerp Academy . He then worked in England, Russia, Paris and Rome (from 1850 to 1873). From 1853 he also had a studio in Rome. From 1867 to 1870 he was also President of the German Artists' Association . He was on friendly terms withKurd von Schlözer , whose Mexican letters are addressed to him. In 1873, Wider moved to Berlin.

During his Roman times, Wider had contacts with many contemporary painters, such as Ludwig Passini , who frequented the Antico Caffè Greco . His picture Pope Pius IX should also be at this time . have arisen.