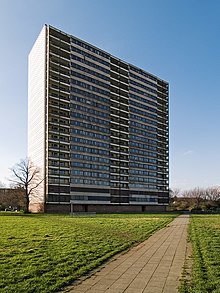 The Hochheide residential park (also known as the White Giants ) is a large housing estate that is a complex of high-rise buildings in the Hochheide district of Duisburg .

The total of six buildings, each twenty storeys high (3 with 160 apartments each, 3 with 320 apartments each), were completed in 1974 on part of the site of an old miners' settlement (so-called Rheinpreußen settlement) (Council decision of the city of Homberg 1969).

The smaller of the two high-rise buildings at Hanielstrasse 36–38 was renovated in 2008 and 2009 and has been inhabited again as the “Red Giant” since September 2009. A building with a total of 360 apartments had been vacant for several years after it was vacated by the regulatory authorities due to major security deficiencies and was blown up on March 24, 2019. This demolition was originally announced for autumn 2017 on the homepage of the leading demolition company Prangenberg & Zaum GmbH (P&Z) and was accompanied by a website. For the first time, an authority or police monitored the area around a blast with more than 15 drones, some of which were equipped with thermal imaging cameras, and used jammers against private drones. Moderation and cameras were on the flat roof of a high-rise building some distance away. Before the building, which had 20 floors above ground, was blown up, the 7,100 m 2 underground car park , which was far in front of it, was demolished.

Of the remaining four houses, two are in the hands of a single owner; the rest consists of condominiums. In the meantime, the fire protection equipment in individual houses no longer meets the currently applicable safety regulations. Two of the houses (Friedrich-Ebert-Str. 10–16, Ottostr. 54/56) with a total of 480 residential units were to be partially renovated in February 2007 with regard to the technical systems criticized by the responsible building authority; Corresponding work has also taken place in the other inhabited houses.

The area surrounding the “white giants” is in need of renovation. The first step was taken with the revitalization of today's “Red Giant”. As in many settlements of this type, more affordable housing can be found there today. The "Red Giant" is an exception, with its range of concierge services , in-house kiosk , social partner Caritas in the house and modern, above all barrier-free equipment (e.g. underfloor heating, large windows, etc.), which brings people back into the neighborhood get. The inclusion of the housing estate in the “Urban Redevelopment West” project should also ensure a structural change, as the housing estate has developed into a social hotspot in some areas and can be described as out of date in terms of urban development.

In 2003, the Federal Ministry for Transport, Building and Housing (BMVBW) under Manfred Stolpe launched a competition entitled “City of the Crime Scene”, in which the area around the “White Giants” was to be worked on alongside other locations. Here, not only the buildings and their structural condition should be explicitly processed, but also the socio-spatial and ethnic diversity should be included in the design. Following the competition, the results were presented across Germany for around four months.

The demolition of the building at Friedrich-Ebert-Straße 10–16 was planned for autumn 2017, but was postponed at short notice due to asbestos findings . The demolition took place on March 24, 2019. [outdated]