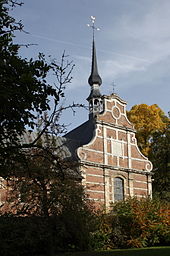 Former chapel of the Zwartste family in Leuven

The Congregation of the Soeurs Noires de Louvain was part of the Catholic sister community of the Zwartsteers, which was based in nursing.

The monastery community was founded in 1438 by Elisabeth Ymbrecht, who converted from the Jewish to the Catholic faith and came from the Principality of Liège. Approved by the Liège bishop Louis de Bourbon as early as 1462, they now accepted the Rule of St. Augustine and took their vows for the first time in the same year. The monastery, which was placed under the supervision of the Alexian monastery in Löwen , was already located on today's Zwartstestraat and saw the consecration of its chapel by the Liège Auxiliary Bishop Libert in 1478 , but also the limitation of its members to a maximum of 27.

After the founder died four years later, the bishop placed the monastery, which was also called Godtshuys van Nazareth , under the prior of the Windesheim canons of Sint-Maartensdal in 1513.

After lively building activity had developed in the 17th century, the community, which in 1597/98 still had 16 sisters and in the first half of the 18th century was always around 20, grew to 30 religious by 1796. During the French Revolution, the monastery was not closed, but from 1798 onwards the care of mentally ill women was transferred. At the same time subordinate to the Commissie voor Burgerlijke Godshuizen, in 1820 they received royal license as a religious order.

Thirteen years later, at the request of the Bishop of Tournai, they sent two sisters to his episcopal city, where they founded a new congregation. In the second half of the 19th century they were able to enlarge their monastery and thus expand their nursing activities.

After the Congregation of Episcopal Law had aggregated into the Augustinian Order on December 26, 1927, it got into a vocation crisis. In 1964 there were 16 sisters, all of the others were old, except for one who was in her 40s. So they united with the state's Norbertinen in Duffel and on December 17th of the same year they made their profession in the hands of the Superior General.

Four years later a house was bought in Korbeek-Lo, where a retirement home called Emmaus was set up and the Zwartste family were transferred there on February 1, 1969. The institute of the Zwartzusterkloster, however, was given up after only a few of the state's Norbertinen were still active. Apparently the sisters were kept together after the merger of the congregations, but in 1993 they were transferred to Sint-Antonius-Zoersel, where in 1997 three of them still lived.

A student residence is now housed in the former monastery buildings.