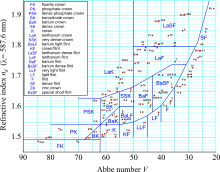 In the Abbe diagram, the Abbe number is plotted against the refractive index.

The Abbe number , also Abbe's number , is a dimensionless quantity to characterize the optical dispersive properties of optical glasses , i.e. how much their refractive index changes with the wavelength of light. The greater the relative dispersion of the glass, the smaller its reciprocal, the Abbe number.

The Abbe number is named after the German physicist Ernst Abbe . As a formula symbol is common.

The strength of the refraction of light depends on its wavelength (one can also say: on the light color). This is known as dispersion and is, for example, the reason for the splitting of a white light beam at a prism into a colored spectrum . All materials used for optical components (e.g. lenses ) exhibit a more or less strong dispersion. Optical devices such as camera lenses therefore generally display the various colors of light differently, which can be shown by colored edges on the images of object edges or colored halos around bright light sources. This aberration is called chromatic aberration .

For a complete description of the dispersion of a material (e.g. a type of glass ), it is indicated how the refractive index of the material changes when the frequency or wavelength of the light varies . The function or must therefore be specified. To do this, you can either specify the refractive index at different specified wavelengths or a set of coefficients of a dispersion formula such as the Cauchy or Sellmeier equation . For simple calculations, however, it is often sufficient to describe the dispersion in the range of visible light by a single parameter, namely the Abbe number.

The dimensionless Abbe number is defined as

A material with low dispersion has a high Abbe number. The reciprocal value of the Abbe number is also known as the relative dispersion .

Influences of the addition of selected glass components on the Abbe number of a special base glass.

The Abbe number is important when designing achromatic lenses . These are lens systems in which the chromatic aberration is particularly small. For example, an achromatic lens consisting of two thin lenses that are a short distance apart has the same focal length for Fraunhofer lines F and C, if

is, where are the Abbe numbers and the focal lengths of the two lenses. Such a lens system images blue and red light of the wavelengths 486 nm (F) and 656 nm (C) onto the same point. The remaining color error is significantly less than if only one type of glass had been used. Achromatic lenses were the basis for the construction of large lens telescopes in the 19th century.

The color error still remaining with the achromatic lens (the so-called secondary spectrum ) is often expressed in a purple border around light objects. In order to reduce the chromatic aberration even further, the refractive index must be taken into account for more than two wavelengths (if the light is mapped onto a point at three wavelengths, you have an apochromat ). Nevertheless, the Abbe number helps to roughly classify types of glass.

In the infrared and ultraviolet range , the Abbe number, which is defined for wavelengths in the range of visible light, is unsuitable.