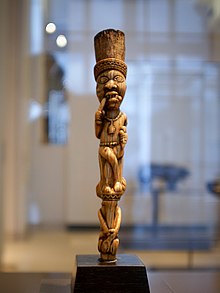 The concept of an African culture is not tenable in the strict sense, as the respective ethnic groups or states and social classes differ greatly. The various regions in North Africa and, on the other hand, Trans- Saharan Sub-Saharan Africa form an important delimitation . The North African states of Egypt , Libya , Tunisia , Algeria and Morocco see themselves culturally as part of the Arab world or, as in Morocco, insist on the diversity of their respective ethnically based cultures between Berbers, Arabs or Africans.

The assignment of states such as Mauritania , Sudan , Madagascar , Eritrea or Ethiopia is just as problematic in the case of a geographical division, as the national borders usually do not match the ethnic groups and their specific culture. Ultimately, it is left to the people of the respective ethnic groups to define their cultural affiliation. So understand z. B. Sudanese at the same time as members of an ethnic group, as Africans or acculturated Arabs and of course as members of a modern social class.

Due to their specific, Christian culture, the painting and handicrafts of some ethnic groups in Ethiopia have a long tradition. As elsewhere, they are closely linked to the country's eventful history . The painting, which is atypical for sub-Saharan Africa, and the production of fine handicrafts have their roots in the old North African-Near Eastern cultural area. They have held up to this day, embedded in the country's unbroken Christian tradition. With a view to the approximately two and a half millennia old high culture history, Ethiopia can be described as the only still living and clearly visible "offshoot" of the ancient Mediterranean civilization in Africa.

The vast majority of black Africans speak one of the Niger-Congo languages , all of which have a common origin. That could be the actual basis of a common "Africanity". Above all, the very large distribution area of ​​the closely related Bantu languages , which includes almost the entire southern half of Africa, shows other cultural similarities in addition to the language that could be traced back to an "original Bantu culture", including that of Carl Meinhof postulated the “Urbantu language”.