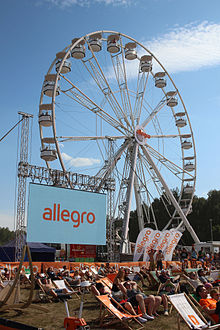 Allegro is the largest Polish internet auction platform . Its still dominant position in Poland can be explained, among other things, by its early online presence (1999) and the resulting level of awareness. Also been established, the company has since mid-2006 in the Czech Republic (Aukro.cz), in Hungary (TeszVesz.hu), Russia (molotok.ru) and in Ukraine (Aukro.ua).

Animated by the success of eBay in the USA, the auction house Allegro was founded in 1999 by QXL Poland, the Polish division of the British company QXL Ricardo, which specializes in internet auction houses , while the big competitor eBay.pl only followed in 2005.

Allegro's fixed assets were initially only 4,000 złoty , and at the beginning of 2000 Allegro had only 8 employees. At the beginning of 2001, the working capital was increased to around 50,000 zlotys, and by the end of 2006 the auction house had over 300 employees for service, security, advice and other responsible employees.

Allegro's market share in Poland was around 53 percent in mid-2006, compared to ebay.pl's share of around 13 percent.

There are currently over 5 million registered users at Allegro.pl alone.

Allegro is represented under the following domains in these countries.