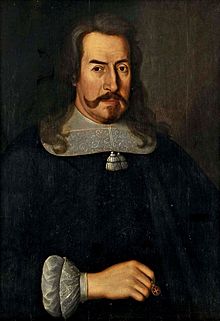 Don António Luís de Meneses , 1st Marquês de Marialva and 3rd Conde de Cantanhede (born December 13, 1603 in Cantanhede ; † May 19, 1675 ) was one of the most important generals of the Portuguese Restauração .

Meneses came from a respected noble family in Portugal and took an active part in the 1640 revolt against Spanish rule, which made John IV king of the country. The following year he took over command of the Portuguese armed forces as mestre-de-campo and in this position was jointly responsible for the first Portuguese victories. For these successes he was raised to Marquês de Marialva on June 11, 1661 . For the campaign of 1663 he replaced Penhaflor as commander of the Portuguese operational army, which he remained until the end of the war in 1668.

After the war, his political career was not successful. He died impoverished in 1675 and was buried in the convent of Santo António in Cantanhede.