The so-called " Apache Revolver " is the combination of weapons counting handgun . The name goes back to the main users "Les Apaches", a group of people to be assigned to the French underworld of the early 20th century, who were mainly represented in Paris.

The design originated in the 1860s and is attributed to the Belgian gunsmith Louis Dolne. These weapons were manufactured in Dolne's factory in Liege until the end of the 19th century . Serial numbers from the lower three-digit to the middle four-digit range are verifiable, so several thousand pieces of all versions are likely to have been produced. 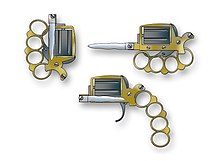 Drawing of the various possible uses of
an Apache revolver

The Apache works according to the principle of the so-called Pepperbox or bundle revolver . He uses Lefaucheux cartridges in caliber 7 mm and has a foldable brass knuckle , which when folded out forms the revolver grip, as well as a small, also foldable, double-edged blade as a stabbing weapon .

When folded, the weapon has a length of 105 millimeters, when opened it measures 200 mm. The weight is 385 grams. The drum holds 6 cartridges. In addition to the 7 mm variant, versions in caliber 5 mm are also known. Most of the weapons still in existence today have a brass frame; cast steel versions are rare.

Due to the missing barrel, the range of the revolver is very limited. Since the main components of the cartridge drum can be folded inwards, the Apache can easily be hidden in a jacket or trouser pocket. To make this hidden carrying even easier, the rooster had no spur. It was customary to leave the chamber empty in front of the hammer, as the weapon does not have a ring around the trigger guard or safety lever. A certain degree of security was provided by the fact that the weapon could not be fired when the brass knuckles / grip piece were folded in. Precise aiming was not possible due to the lack of a rear sight and front sight . Despite its limited potential, the revolver was quite effective as a close-range weapon. To reload, the cartridge drum must be removed, refilled and reinserted. 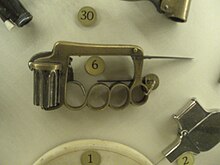 A 9 × 19 mm Parabellum version of the weapon of a similar design (but with no official name) was reportedly used by British special forces during World War II. Exact information about production figures and technical details have not yet been published.

Louis Dolne's construction was certainly a certain economic success, which is definitely supported by the length of the production time of approx. 40 years and the number of pieces, as evidenced by the serial numbers. A very similarly designed weapon by the French manufacturer Joseph Delhaxhe was very likely inspired by Dolne's model.

The term "Apache Revolver" is seen as controversial. The author of the book "Pistol Knives / Edged Weapons Combined with Pistols" considers the claim that the weapon was mainly used by organized Parisian underworld gangs of the 19th century, the "Les Apaches", to be a rumor: The Apaches were petty criminals from the area of the newly formed industrial proletariat of the big cities, which kept themselves afloat with drug trafficking and small burglaries. In most cases, their income was certainly not enough to be able to afford such a pistol, which was after all a high-quality imported product and was certainly not one of the cheap weapons.