Arbitrarity (from the Latin arbitrarius , associated adjective arbitrary , literally 'arbitrary', hence also arbitrariness ) means the creation or nature of a thing based on arbitrariness instead of a "natural necessity".

In linguistics and semiotics , the term describes a fundamental property of linguistic signs : the relationship between the signifier ( signifier , phonetic image, sign shape) and the signified ( signified ) is based on human convention and agreement instead of natural law. 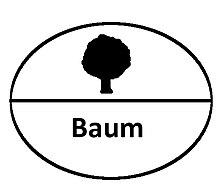 The Swiss linguist Ferdinand de Saussure coined the term arbitrariness in his work Basic Questions of General Linguistics , published posthumously in 1916 ( French original title Cours de linguistique générale ). Saussure relates arbitrariness to the relationship between the sound image ( image acoustique ) and the concept ( concept ) of a linguistic sign. He proves the arbitrariness of this assignment with the fact that the same object of reality is named differently from language to language.

Arbitrariness does not mean that an individual speaker can in principle freely choose in the construction of linguistic expressions (apart from the creation of a neologism ). In language acquisition and communication with other people, the speaker experiences the connection between sign and meaning as a habitual connection. The assignment of designations and meanings is thus regulated by the conventions of a language community . Rather, arbitrariness means that there is no objective reason why a very specific sound image is conventionally assigned to an object or concept.

Arbitrariness does not mean that the shape of the signified is fundamentally not motivated by the signified. Onomatopoeia words ( onomatopoeia ) that imitate a natural sound (“cuckoo”, “kikeriki”) or grammatical phenomena - such as plural formation through reduplication in some languages - rather show that linguistic signs can also be at least partially motivated by a similarity relationship to what is designated. In such cases, one speaks of the “relative motivation” of the sign while at the same time, in principle, there is arbitrariness.

The historical background for the term in modern linguistics lies in the linguistic-philosophical debate between conventionalists and naturalists, as described in detail by Plato in his dialogue Kratylos . Outside of the European context, similar ideas can also be found in the “inner chapters” of the Daoist Chinese classic Zhuangzi .

While conventionalism traces the origin of language back to human positing and agreement, naturalism takes the view that the words of the language represent the essence of the thing designated because of a natural affinity between their sound form and their meaning. Such an affinity is not only seen in obvious onomatopoeia, but according to the Platonic conception there is rather an original natural relationship between the individual sounds and the factual properties, processes and actions they denote (e.g. between the vibrating sound "r" and the property "Move"). This natural relationship between meaningful word formation patterns and the transfer of meaning continues in the development of language and makes it possible to infer the essence of the thing referred to when examining a word from its sound form and origin. The approach has proven to be extremely fruitful , especially in ancient and medieval etymology : If, for example, the Latin word vulpes (fox) is explained by the fact that the name of this animal originated from veloces pedes and therefore on the “quick feet” of the fox hints.