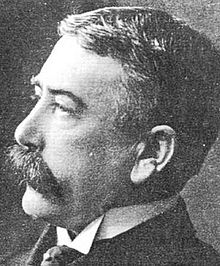 Ferdinand de Saussure (born November 26, 1857 in Geneva , † February 22, 1913 at Vufflens Castle , Canton of Vaud , Switzerland ) was a Swiss linguist . He left a lasting mark on linguistic structuralism and the development of Indo-European studies and semiotics in the 20th century.

Blackboard on Saussure's birthplace in Geneva

Saussure was the son of the scientist Henri de Saussure and Louise Elisabeth de Pourtalès, grandson of Nicolas Théodore de Saussure and great-grandson of Horace Bénédict de Saussure . From 1876 to 1880 he studied Indo-European Studies in Leipzig, and from 1878/1879 also a semester in Berlin with Heinrich Zimmer . In 1882 he married Marie Faesch (1867–1950), daughter of the Swiss engineer Jules Faesch (1833–1895). Through his wife, Vufflens Castle came into the possession of Ferdinand de Saussure and his descendants.

After obtaining his doctorate in Leipzig, Saussure taught at the École pratique des hautes études in Paris from 1881 to 1891 . From 1891 until his death he was professor of comparative linguistics (Indo-European studies) at the University of Geneva . During this time he devoted himself increasingly to studies of Germanic heroic sagas and Latin poetry, in which he - without success - tried to prove the presence of anagrams . In three lectures on general linguistics , which were held between 1906 and 1911, he presented his basic ideas, as he had developed them especially during his time in Paris.

His son Raymond de Saussure became a psychoanalyst and was one of the most important organizers of psychoanalysis in western Switzerland .

The asteroid (13580) de Saussure was named after him and his great-grandfather Horace-Bénédict de Saussure in 2010.

During his lifetime, Saussure emerged exclusively with Indo-European studies on comparative linguistics.

In his Mémoire sur le système primitif des voyelles dans les langues indo-européennes (1879), Saussure reconstructed the Indo-European vocal system. He tried to show that the late Urindo-European sounds * a , * ā , * o and * ō were created in many cases from an * e in combination with two - as Saussure called it - "sonantic coefficients" ( coefficients sonantiques ). He gave no further information about the phonetic properties of these postulated coefficients.

The Danish linguist Hermann Møller suspected that these coefficients were laryngals . The Polish linguist Jerzy Kuryłowicz demonstrated in 1929 that the Hittite language that was deciphered only in 1917, four years after Saussure's death, contained one of the postulated sounds. During the 20th century, the laryngeal theory became generally accepted.

Saussure is considered the founder of modern linguistics and linguistic structuralism . His students Charles Bally and Albert Sechehaye published the Cours de linguistique générale (in German basic questions of general linguistics ) three years after Saussure's death . The course develops a general theory of language as a system of signs.

Saussure distinguishes three aspects of language, which he describes with three different expressions:

The term langage describes human language as a pre-theoretical area of ​​phenomena, i.e. as it is encountered by the speakers in their speaking activity. In contrast, the langue is to be understood as a theoretical language term. The langue can therefore be understood as a linguistic perspective from which the langage is viewed.

Langue has a social and an individual dimension: In its social dimension (fait social) , langue is an intersubjectively valid social institution, a socially generated, conventional system of linguistic habits that is suspended in the minds of the speakers. In its individual dimension, it is a mental “depôt” or “magasin” (for example: camp) of a subjectively internalized individual language.

The term parole also has a social and an individual side. He once referred to the specific speech act, ie the individual realization of the langue by each individual speakers ( here and now ) bound, space-time implementation of the system. At the same time, the parole , in its social dimension, is the place of genesis and change in langue .

Langue and parole are therefore in a mutual relationship: on the one hand, there is nothing in the langue that has not entered it beforehand through the parole . On the other hand, the parole is only possible because of that social product called langue .

The authenticity of the course

The two editors stuck to transcripts from Saussure's lectures. However, they had not attended those lectures themselves. Text-critical examinations have shown that the wording of the central theses of the course is not found in the postscripts, but was added by the editors. This includes the often-quoted sentence that language is “a form , not a substance ”. It was not until the 1950s that research that was critical of the source developed, which has since endeavored to open up Saussure's fragmentary estate.

With his "transcendental-hermeneutical" reading , the German linguist Ludwig Jäger represents a presentation of the teachings of Saussure that differs greatly from the Cours de linguistique générale . Jäger does not reconstruct Saussure's views on the basis of the course , but on the basis of neglected manuscripts in which, in his opinion, “the authentic Saussure” can be found. In international saussure research, Jäger's view represents a single interpretation among others that cannot be considered generally accepted.

Signs and the synthesis of signs

While the term des signe ('sign') is still used in the Cours and (in congruence with the early romantic discussions about this, especially with Novalis ) the mental and phonetic side of linguistic signs as a signified ("signifié" = designated, sign content) and significant ( Saussure does not use these terms in the manuscripts used by Jäger. Here he coined the term des Sème for the whole of the sign , for the sound envelope of the Sème that of the Aposème and that of the Parasème for the mental aspect of the sign.

The term Sème always denotes the "whole of the sign, sign and meaning united in a kind of personality" and is intended to eliminate the predominance of either the phonetic or the intellectual side. The terms Parasème and Aposème do not denote the parts of a Sème , but aspects of it. These aspects are not distinguishable units that are logically ahead of the Sème and are then simply put together while speaking. This means that not only are meanings that are already mentally linked to sounds that are also present. Language does not represent thoughts. Rather, it creates it: it is only in the act of speaking, of articulation, that the connection (synthesis) of pre-linguistic and therefore chaotic and, as it were, without a trace, passing thinking takes place with the phonetic substance. This process takes place in time, i.e. linearly : words are uttered one after the other.

The phonetic and intellectual aspects of the sign can only be differentiated in retrospect of their creation, the sign synthesis. The whole of the sign produced there, the Sème , is a necessary condition of both sides. Aposème and Parasème are not autonomous components of the Sème , but merely points of view from which it can be viewed by linguists. For Saussure they can be compared to a sheet of paper: thinking is the front, sound is the back. Just as one cannot cut up the front without cutting the back at the same time, just as little can the thought be separated from the sound.

For Saussure, meaning is not something that logically precedes the synthesis of signs, but rather is concretely generated in social exchange, in the synthesis of signs. The meaning assigned to a sign is not due to some kind of internal connection between the sign and what it signifies. There is no quality inherent in the sign itself that could justify a specific meaning. This principle of the arbitrariness of linguistic characters, so-called by Saussure , is unfortunately translated in German with arbitrariness or arbitrariness . However, the principle of arbitrariness does not describe a free choice of the character with regard to a specific designative function. What is meant is the freedom of the sign , which is not tied to a specific meaning by any property inherent in itself and prior to the sign synthesis. This can be seen both in the fact that different languages ​​use different characters for the same meanings and in the fact that the meaning of characters changes over time.

Meaning is not an (ontological) property of signs, but an effect of their use by the linguistic community, insofar as the slogan is the exclusive place where linguistic sense is produced. At the same time, it is due to the fact that language characters are part of a system (the langue ) within which each character can be distinguished from all other characters. The linguistic form only gains significance because it is systematically correlated to other forms. The meaning of a sign is not determined by itself and thus positive, but rather by its difference to other signs. With Saussure, meaning always comes from the side, that is, through the opposition to other signs. He therefore speaks of the worthlessness of the - in itself meaningless - sign itself (“nullité du sème en soi”). Saussure describes this systemic aspect of the differential logic determination of meaning as the valeur , the systemic value of the sign.

The equally individual and social character of langue as a subjective vocabulary on the one hand and a supra-individual system of linguistic habits on the other, and its anchoring in the parole as a place of dialogical genesis of meaning, is what Saussure determined the principles of the life of language in the Time result. At first glance, these principles seem contradictory: the characteristic of language is as much its continuity in time as its constant transformation .

While the continuity of language, its actual state as a certain language stage at a certain time, is called the synchronic level, the diachronic level focuses on the change in language over time. Methodologically, these two levels must be strictly separated from one another in linguistic practice. In fact, however, both are closely interwoven: the aspect of the continuity of language addresses language on the one hand as a social and historical fact. The question - often asked in philosophy - about the origin of language, i.e. about a process of the original naming of the world, does not arise for Saussure, because the idea of ​​an original negotiation of names presupposes a conceptually developed world and thus the existence of language ahead.

On the other hand, the continuity of language is a condition of the possibility of communication in general, which is always linked to speakers who are conscious of being in synchronicity , to horizons of meaning and ascriptions of meaning that are intersubjectively shared at a certain point in time. The continuity of language is therefore the basis of its social character. It is precisely this social character, i.e. the fact that speakers deal continuously and jointly with language, which at the same time owes the permanent transformation of language. The movement of language - systemically speaking: the constant readjustment of the relational system langue - is insatiable and uninterrupted. However, it is usually not noticed by the speakers. The essence of language is therefore - in a word from the linguist Christian Stetters - that of fluctuation : that of a " substance that does not exist, but that becomes constant and thus continuously changing."